Sometimes it’s shocking, sometimes it’s fun, to look back at images and cartoons of days gone by and see what our ancestors found funny, exciting, or somehow “accurate”. We might snicker at the classic “damsel in distress” who always needs the heroic male to get her out of whatever situation she foolishly got herself into, but we dismiss it as indicative of the times. Other “politically incorrect” elements are harder to dismiss. Let’s take a look at three comic books that would never make it past the idea stage these days:

Drawn by Frank Frazetta, the title character, Dan Brand, made his first appearance as the grandfather of the Durango Kid. Dan lived in colonial Pennsylvania. When his bride-to-be, Lucy Wharton, was shot on their wedding day, Dan’s whole purpose in life became revenge. The killer had been a rival suitor, Peter Bradford, who meant to shoot Dan but hit Lucy instead. (What a way to impress a girl on her wedding day,eh?). Dan went out west, which was “still East of the Mississippi”, got mauled by a bear, and was saved by Catawba chief “Great Eagle” and his son “Tipi”. After a year of living with the Catawbas, Bradford showed up again. He wasn’t only supplying firearms to rival tribes, but he was a rum-runner besides. Bradford murdered Great Eagle, but Dan pitched Bradford over a cliff.

These days the title alone would probably stop this one before it left the drawing board.

… and then there’s Chop-Chop (Chinese, if you couldn’t guess by the name). While the previous stereotypes might draw an eye-roll here and there or mutterings of “show some imagination!”, Chop-Chop would provoke outrage. Depicted in cartoonish fashion, the early issues show a squat, buck-toothed character with his hair pulled back into a queue and “coolie” clothing. His English is broken with his R’s replaced with L’s and his weapon of choice is a meat cleaver. Presented as a comic-relief, the character slowly evolved , finally becoming a full-fledged member of the team in 1952 and undergoing graphic style changes that culminated in a more realistically-drawn person. 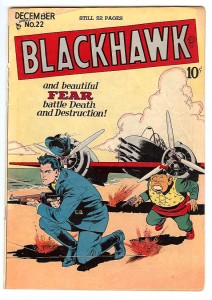 This one lasted only one issue, and believe it or not, that’s not necessarily a good thing. It was created, written, and drawn by an all African-American staff and was founded by Orin Cromwell Evans, the first African-American writer to cover general assignments for a mainstream newspaper. Though the title would never sail these days, the content is worth looking at. It contained a number of stories, some cute, some funny, some exciting:

The variety of story type gave this comic book the potential to reach a wide audience. However, it carried a higher price than most comic books of the day (15 cents as opposed to 10 cents) and suffered from a very limited distribution area. Copies do exist, but none are known to be in mint condition.

One of the things that make vintage comics such a delight is the chance to see through the eyes of those who came before us. Looking at vintage comics allows us to hear the statements made about the condition of the world back in the day, for better or for worse, and yes, we are allowed to enjoy the memories.

If you have a particular memory of comic books or if you’re looking to round out a collection, contact us today!