SUPERMAN VS THE AMAZING SPIDER-MAN 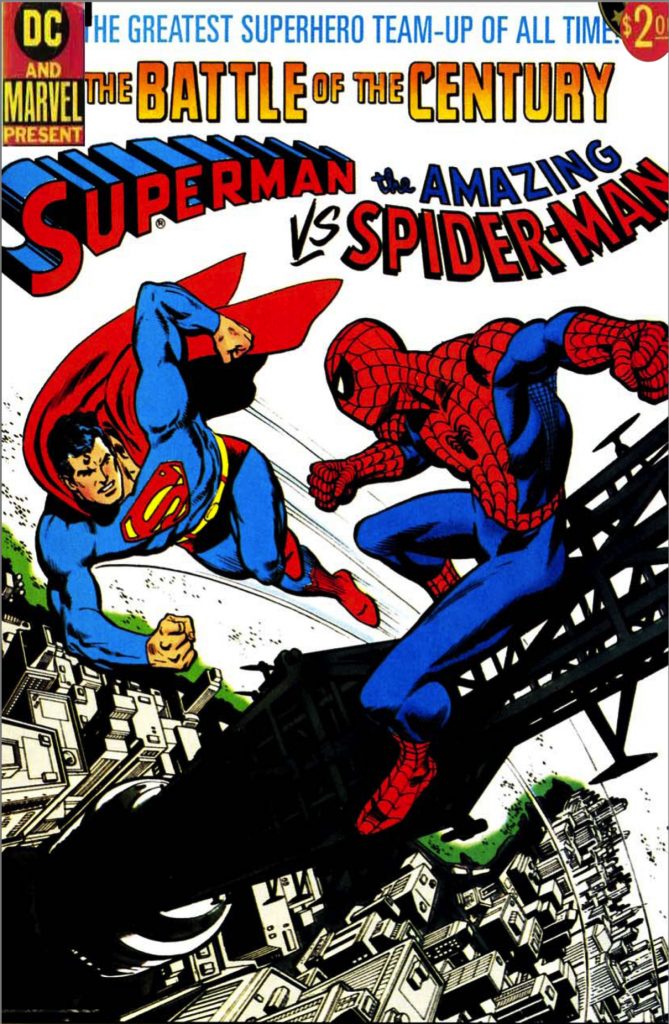 As I wrote back in our look at Great Superhero Battles; “Published in a joint venture between DC and Marvel Comics this oversized edition is the great grand daddy of the mega fights even though we’ve seen other battles before. This one, drawn in epic grandeur by Ross Andru and inked by Dick Giordano deserved the special treatment.   It matters little that the fight is completely mis-matched and it’s only when Spider-Man is given temporary kryptonite strength by Lex Luthor that it becomes even close to a fight, plus as we see with almost all of these they mostly end up in a draw. Analyzing the fight, Superman certainly out powers the teen Spider-Man but his midwestern niceness would have probably seen him lose the fight before he’d actually hurt a kid. Spidey is a pretty nice guy under it all too, so this one likely would have ended as it did in a draw.”

SUPERMAN VS THE AMAZING SPIDER-MAN is a legitimate blockbuster but for fans who were not around for it’s first release I have to testify that this was a complete Earthquake– up until this time in the minds of most comic fans Marvel and DC got along on about the same level as Amber Heard and Johnny Depp– mortal enemies who would fight to the death if given the opportunity. Few of us knew that the two had teamed up for a WIZARD OF OZ Treasury a few years earlier. 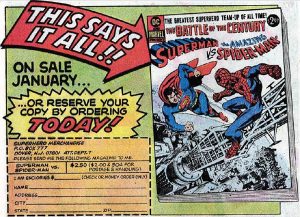 So when we either saw ads for this landmark co-publishing venture or discovered it, as I did, one Spring afternoon trip to my local pharmacy where I bought all my comics, it was an instant buy. For the record I wasn’t much of a Superman fan in my younger days, although I did watch the George Reeves show in afternoon re-runs (back in those grand old days of having seven TV channels to choose from– can you even imagine that?– flipping channels after school your choice might have been SUPERMAN or DAYS OF OUR LIVES). I have to say that after devouring this massive Treasury Sized epic I certainly gained a new appreciation for the character (I was a huge Spider-Man fan by this time) and made me excited to see SUPERMAN THE MOVIE the following year.

SPIDER-MAN would get his own TV Series around the same time, so it wasn’t hard to imagine Nicholas Hammond and Christopher Reeve in their respective parts in re-reading the story.  In lesser hands the characters would have been more weakly defined by writer Gerry Conway, who also edited the story was spot on. 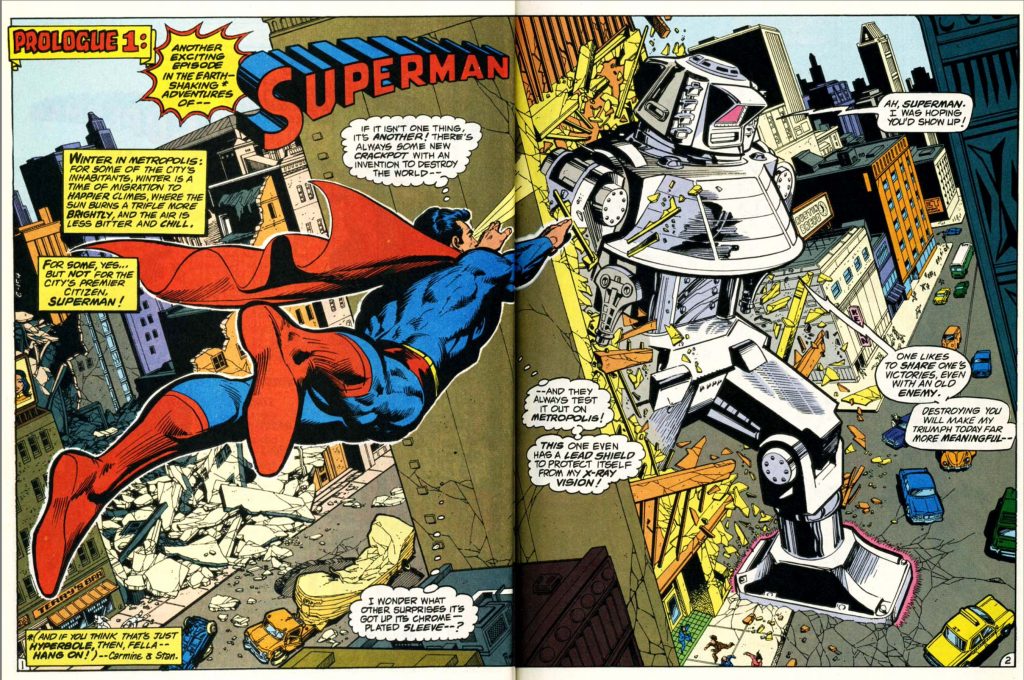 The Behind the Scenes story of the book actually owes it’s origins to the Superman Feature Film;  Literary agent Dave Obst came to Marvel Publisher Stan Lee and DC President Carmine Infantino and pitched the idea of a feature film featuring a crossover of Superman and Spider-Man. Because both properties were currently in development for their own live action adventures the two companies decided to do the story as an oversized Treasury.

As Ross Andru turned in pages they were hyper reviewed by both companies with Neal Adams and Dick Giordano redrawing most of the Superman figures throughout the story and John Romita Sr redrawing many Spider-Man faces. Now normally I’d be outraged at another artists work being touched but this was such an important story and the end result is so close to perfect I am willing to give it a pass. 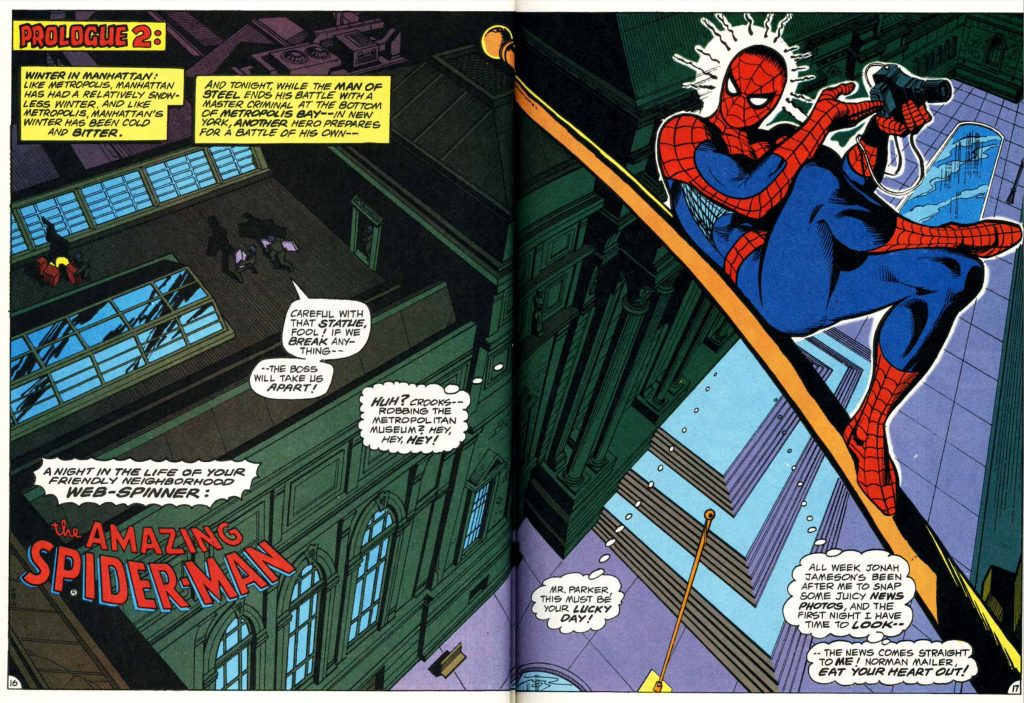 I spent the Summer of ’76 with my copy of the colossal team-up on my annual trip to family in Portland Oregon, I read it on the plane, in the car on trips, I read it and re-read it and it was the closest thing to a big budget film we fans had until that point and the story and art lived up to the concept.  I wish I could say the same for the sequel, but it’s a pale follow up a few short years later. I’d thought that maybe I had aged out and that explained my lukewarm opinion of it, but when they did BATMAN VS THE INCREDIBLE HULK a year after that I really enjoyed that one too (and that’ll be another blog).

This edition was a special event back in 1976, and it holds up today.

TONIGHT! TEDDY BEAR IS BACK WITH SOME TED TALES, T

PREVIEW #3 FOR OUR FROZEN TOES TUNDRA SALE, THIS S

PREVIEW #2 FOR OUR FROZEN TOES TUNDRA SALE, THIS S

PREVIEW #1 FOR OUR FROZEN TOES TUNDRA SALE, THIS S

PATSY WALKER V. LINDA CARTER WOULD STILL BE A BETT

TELL YOUR FRIENDS WHERE ALL THE COOL CATS HANG OUT

TONIGHT! AT 6 PM! Superworld may not be in the off