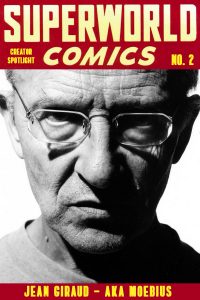 Ask most comic fans who the “most famous” comic book artist in the world is and the answer will invariably depend on a number of factors; where that fan is from, the era of comics they most prefer and many times who they were reading when they grew up.

In America the answer most of us would give is likely Jack Kirby, Will Eisner, Frank Miller, Todd McFarlane or even Jim Lee.   Fans who only know comics from movies would chime in “Stan Lee” even though we who know better understand Stan wasn’t an artist. 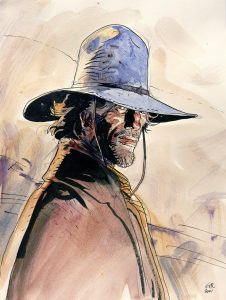 Jean Giraud in 1938 in France and went on to become one of the biggest comic book artists in the world.   In Europe, where comic sales dwarf American comics sales Giraud, who adopted the name Moebius for his comics work- referring to that identity as a “dream” had literally thousands of pages in print including the wildly successful LT BLUEBERRY long running Western series.   He also produced a wide array of sci fi themed adventures and soon found himself sought after by Hollywood who used his work to develop films such as ALIEN, TRON, THE FIFTH ELEMENT and THE ABYSS. 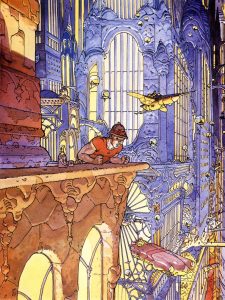 In the late 70s to early 80s he began producing work for a world wide audience in METAL HURLANT which was published in America as HEAVY METAL, the most successful magazine publication devoted to comics which was solely aimed at an adult audience. 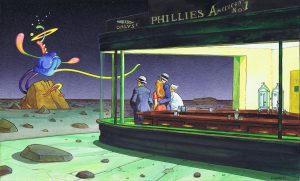 A household name in Europe, something unheard of for comic artists in the United States, Giraud’s wife Claudine setup Giraud’s third publishing house Starwatcher Graphics in 1985 which became essentially the US Branch of Gentiane/Adena publishing which hoped to introduce Moebius’ work to American audiences on a broader level. 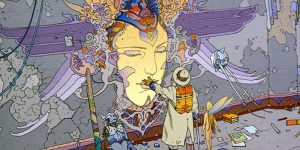 Reflecting on the reception of his persona in America Giraud once said;

“There were thousands of professionals who knew my work. That has always amazed me every time I entered some graphics, or animation studio, at Marvel or even at George Lucas‘. Mentioning the name Jean Giraud did not cause any of the present pencillers, colorists or storyboard artists to even bat an eye. Yet, whenever I introduced myself as “Moebius”, all of them jumped up to shake my hand. It was incredible!” 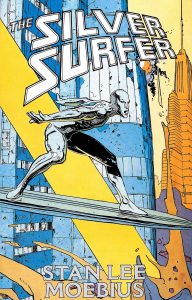 In the mid to late 1980s he produced a series of work for Marvel Comics including a limited edition line of posters, several covers and the much acclaimed SILVER SURFER Graphic Novel with Stan Lee.   This was Moebius’ first time working the “Marvel Method” which was Stan Lee’s habit of producing a rough plot which his artists worked from and only after the pages were drawn would Lee then put in all the final dialogue and narration.

Moebius admitted to being baffled at the prospect of this plot arriving on his desk two days after his meeting with Lee.   Before then he had only ever worked from full scripts. 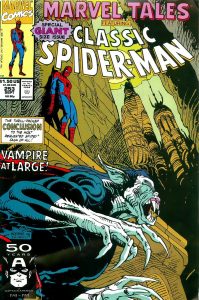 An interesting pop culture bits of trivia, on Lunch With Jose, hosted on Instagram and produced by Superworld Comics the question came up– Did Moebius ever draw Morbius?   Well, the experts were stumped but quick research shows he DID for the cover of Marvel Comics MARVEL TALES #253 published Sept 1991.

Meanwhile in the 1995 submarine thriller CRIMSON TIDE Denzel Washington argues with another sailor over the Jack Kirby vs Moebius versions of the Surfer.   Director Tony Scott later told Moebius he wrote that dialogue on behalf of his brother Ridley who was a huge fan of the artists work. 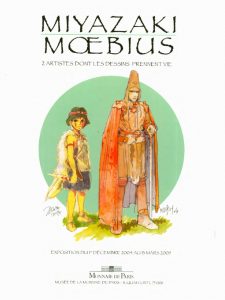 Japanese legend Hayao Miyazaki, who himself started as a comic artist,  was such a fan of Moebius’ work that he based many of his animated film styles on the French Artists work, Moebius was such a fan of Miyazaki that he named his daughter after one of the Japanese Artists most famous characters; Nausicaa.   The two men became fast friends and shared an exhibit of their works in 2004 in Paris.

Jean Giraud died in 2012 after a battle with cancer, but the work of Moebius is immortal and his influence on the comics world has been cited by such notable creators as Jim Lee, Mike Mignola, Neil Gaiman and Joe Quesada.

Check our website for thousands of great comics and remember to tune in to Instagram Live Tuesdays at 6PM EST for TREASURE CHEST TUESDAYS with TED and LUNCH AND DEBAUCHERY with Jose on Thursday at 1PM!