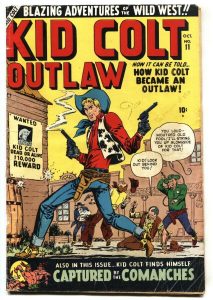 Western Comics gained popularity after World War II when superhero popularity had begun to fade dramatically. Veterans returning from overseas wanted something to entertain them and it’s no coincidence that Westerns continued to be popular in movie houses and on the new and ever growing world of Television.

The Masked Raider is considered to be the first comic western hero published by Timely Comics in 1939 appearing in Marvel Comics #1 (Oct 1939). Other notable characters appearing in Marvel and DC Comics were Black Rider, Phantom Rider, Johnny Thunder, Nighthawk, Pow Wow Smith, Tomahawk, The Trigger Twins and The Vigilante- all of them appearing as backup features in a variety of popular titles. 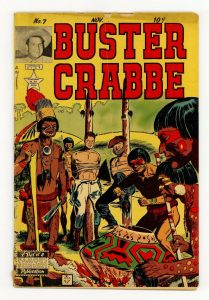 Many of these titles provided lucrative work for their creators, writer Paul S. Newman and artist Tom Gill had an eleven year run on Dell’s THE LONE RANGER, a 107 issue run which remains as one of the longest of any creative team on comics. Stan Lee’s brother Larry Lieber worked for nine years as writer/artist on RAWHIDE KID. Frances Herron and Fred Ray were the team on DC’s TOMAHAWK. Writer Gaylord DuBois wrote the entire run of THE LONE RANGER’S FAMOUS HORSE SILVER as well as a long run of NATIONAL VELVET for Dell and Gold Key Comics. 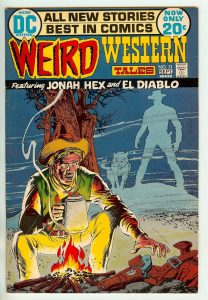 By the 1960s, Western Comics had begun to fall out of favor and soon began to die off, only to see a minor rebirth in the 1970s following the success of out of the norm western films like Clint Eastwood’s successful run of Italian Westerns featuring him as an anti hero in the movies of director Sergio Leone. This interest inspired a rise of strange and weird western tales with WEIRD WESTERN TALES many of which featured DC’s own anti-hero Johan Hex. Other titles included SCALPHUNTER and EL DIABLO. Marvel Comics followed with mostly reprint titles MIGHTY MARVEL WESTERN and WESTERN GUNFIGHTERS Vol 2.

Western comics continue to be popular in the European market even thought they’ve lost favor with American collectors and fans. It’s only a matter of time before this great genre is rediscovered and the prices heat up, but right now you can get a lot of these titles cheap!

Superworld Comics has been in business for thirty years, buying and selling vintage comic books! If you’ve got a collection you are ready to part with give us a call at the number listed at the top of the website, and be sure to tune in to Instagram for Superworld Live Shows; Teddy’s Treasure Chest Tuesdays is on at 6pm and Lunch With Jose in on Thursdays at 1pm. Each show features great comic books at bargain prices and check out our website for thousands more books available!