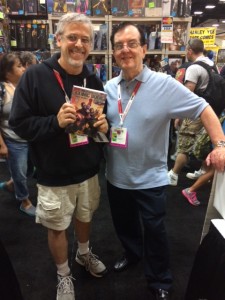 There are comic-cons across the country at all times of the year, but none have the mainstream recognition that San-Diego Comic-Con has. Unlike most cons San-Diego Comic-Con goes beyond just meeting comic creators and interacting with other comic book fans, it also gives fans a front row seat to the latest in genre movie and TV news in the world-renowned Hall H. Hall H is the gathering place for some of the biggest stars in entertainment, and it’s where the major announcements are always made. For example, Marvel Studios brought the cast of The Avengers together for the first time in a Hall H panel and this year it looks like DC and Warner Brothers plan to bring the entire Justice League cast out in their Hall H panel too. Each year just brings something new and exciting for fans to gush over and to say San-Diego Comic-Con is an entertainment extravaganza is putting it mildly. Yet, it wasn’t always one of the biggest weekends in entertainment. SDCC simply started out as a place for comic book fans to gather, meet some creators, and talk shop with one another in one location.

In 1970 Shel Dorf, Richard Alf, Ken Kreuger, Mike Towry, and Greg Bear founded the convention and their first three-day convention, held in the US Grant Hotel, drew three-hundred people. While that number pales in comparison to the thousands that flock to San Diego now, for its time it was impressive. Furthermore, the focus of the con centered around comics and the not so mainstream pop-culture of the day. Comic creators came to meet with fans, sign their work, and share some insider wisdom with fans willing to listen. Comics are still at the core of SDCC, but they tend to get a bit overshadowed by the gargantuan spectacle the movie and TV panels create. As SDCC changed venues around San-Deigo the con itself grew with more people flocking to it each year, allowing for a greater variety of panels. It allowed a small niche of people embrace themselves, and celebrate their nerd culture as they saw fit. Now, its grown to the point where SDCC is a mainstream event, with the nerd culture that was once only celebrated by three hundred people,now celebrated by thousands in attendance and millions keeping track at home.

The comic book culture is at a high not seen since the height of the silver age, and it is with bated breath that we all await San-Deigo Comic-Con 2015.  Follow Superworld comics on Facebook to see our pictures from the show! https://www.facebook.com/pages/Superworld-Comics-Inc/87818848259