Last time we looked at the beginnings of superhero fashion in which comic characters took their looks primarily from the brightly colored and extravagant costumes worn by Circus Performers in the 1930s- a decade when Circus’ were extremely popular among audiences.

The trouble began when Hollywood began adapting superheroes from the printed page to the silver screen. While Circus costumes were generally made from silks and later spandex the original live action versions of our favorite comic book characters sported costumes that were a bit thicker. 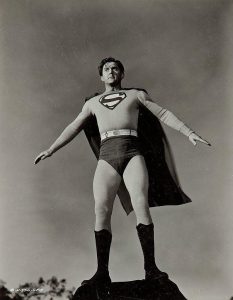 When Captain Marvel, Batman and The Phantom all made their debuts in the early 1940s they wore slightly less than skintight costumes that were all made from wool and felt. Kirk Alyn was outfitted the same way when he made his debut as the title character in 1948’s SUPERMAN. Since the serials were filmed in black and white they were usually grey, red and brown to create what would look like the right “colors” on film.

In 1954 George Reeves TV version of SUPERMAN, which had premiered a few years earlier made the leap into color and for the first time the familiar Red Blue and Yellow costume was now seen. 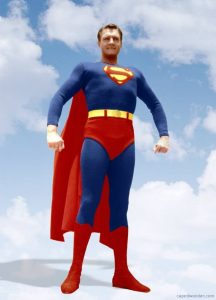 Like Alyn’s costume this one was also wool and cotton with some padding to give Reeves a more heroic physic.  The costume photographed well but was often uncomfortable under the hot studio lights.

The 1966 BATMAN TV Series was the first one to go back to the Circus source for its fabric choices, opting for a dancers body suit and silk for the cape, cowl, gloves and trunks. Color wise they stay very true to the comic books, giving Batman a blue and gray color scheme but the cape and cowl often registered as purple under the lights.   In scenes filmed outside under natural light you could better see the true navy blue colors and even the painted black face and ears of Adam West’s Batman cowl. 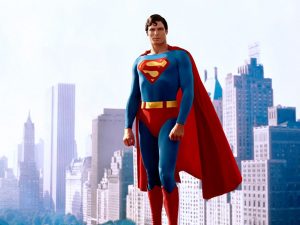 1978’s SUPERMAN THE MOVIE followed the look of the comics but advanced the materials by using a flexible German fabric which absorbed sweat and retained a smooth look. If you watch the extra features on the DVD release you can see Reeve’s screen test in a quickly patched together Superman costume made of dancer fabrics that shows how important absorbing sweat during filming was as he’s covered in sweat stains. 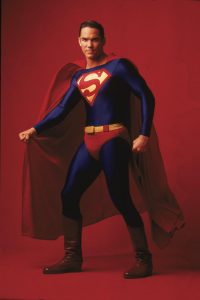 When Dean Cain took on the role of Superman in 1993’s TV Series LOIS AND CLARK his costume was now mostly spandex which photographed well, absorbed sweat and kept from wrinkling. The spandex registered bright colors on film making the character look like he’d stepped off the comic pages.

1989 found Michael Keaton as the new Batman and the producers opted for a fully built in muscle suit made of foam and rubber.  Although far from practical in terms of movement and fighting, the costume looked like leather on film and ushered in a new era of padded superheroes that has become the norm as its seen as a more serious interpretation of what is often considered “silly” comic book costumes.

One can agree or disagree but there’s something great about the brightly colored costumes of Reeves and West versus the subdued monochromatic look of Henry Cavill’s look in modern Superman films MAN OF STEEL, BATMAN VS SUPERMAN; CRY FOR MARTHA and THE JUSTICE LEAGUE.

Check our website for thousands of great comics and remember to tune in to Instagram Live Tuesdays at 6PM EST for TREASURE CHEST TUESDAYS with TED and on Thursday at 1PM for LUNCH AND DEBAUCHERY with Jose!​