WHY DO SUPERHEROES WEAR TIGHTS? Part 1

In the earliest days of comic book superheroes most characters wore tights and a cape, neither of which seem particularly practical for crime busting but when you understand the inspiration it makes more sense. 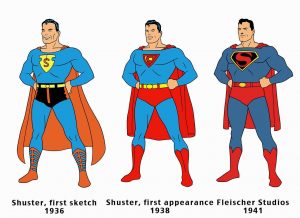 In June 1938 Superman took the world by storm in in Action Comics #1 wearing a costume that was slightly different from the one he wears today.

In the original design Superman’s emblem was more of a badge and his shirt opened wide onto his shoulders while his cape draped low behind his costume. In one of the very first stories he had boots that looked more like something Hercules would have worn rather than the familiar big red boots we have all come to know.

Creators Joe Shuster and Jerry Siegel clearly found the inspiration for Superman’s costume to Circus strongmen and acrobats of the time. 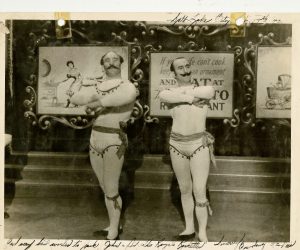 Right down to the underpants on the outside of the tights, many of these performers strutted to the center ring with a flowing cape— the cape is a simple method of creating movement and adding a bit of regality to the costume.

Since Superman was such a big hit it was natural that the plethora of costumed adventurers that would soon fill up newsstands copied his wardrobe so while the tights became a standard for comic book superheroes capes were optional. 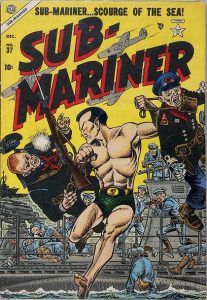 The first super-powered hero to opt out of this fashion trend would be Bill Everett’s Namor the Sub-Mariner Timely/Marvel Comics from Motion Picture Funnies Weekly #1 April 1939. Subby not only abandoned the cape he opted for no tights either, instead wearing only a pair of shorts, appropriate for a character who spent so much time in the water.

After World War II DC Comics began revamping their superhero line which had fallen out of favor with readers by introducing new versions of The Flash and Green Lantern, both of whom were given new secret identities and new costumes which featured tights but no capes.

Marvel Comics threw their hat into the superhero ring after many years of publishing tame monster comics by revamping their own 1930s hero The Human Torch by making him a teenage member of the new rival to the Justice League,  The Fantastic Four. Other heroes soon followed but with the exception of The Incredible Hulk they all wore tights.

Current day superheroes have now seemed to eschew tights for leather and where that trend comes from will be examined in the very next Superworld Blog— tune in next time!

Check our website for thousands of great comics and remember to tune in to Instagram Live Tuesdays at 6PM EST for TREASURE CHEST TUESDAYS with TED and on Thursday at 1PM for LUNCH AND DEBAUCHERY with Jose!