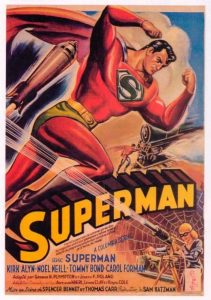 Long before there were blockbuster cinematic universe’s the comics were still represented in movie houses in the form of the weekly movie serial. Back in the days around World War II movies often showed two features, cartoons and several short subjects. Serials were episodic and got audiences to come back the following week to see how the hero or heroine got out of whatever jam they were in as the previous chapter ended.

Many popular comic strips, pulps and radio shows were all adapted into the serial format including FLASH GORDON, DICK TRACY, THE LONE RANGER, GREEN HORNET, BRENDA STARR, THE SHADOW, THE SPIDER, BRICK BRADFORD, BUCK ROGERS and many more but the first original comic book character adapted into live action was in 1941’s ADVENTURES OF CAPTAIN MARVEL from Republic Pictures.

And it almost wasn’t.

Originally Republic had negotiated and paid for the rights to make a movie serial based on National Comics SUPERMAN. A cast was hired, a script was written and special effects were worked out so that Superman could fly, walk through fire and battle giant killer robots. Republic was well known for being less than faithful in bringing characters to the screen and just before filming began National Comics objected to many of the changes they were making and walked away from the deal leaving Republic to scramble with what they had, taking most of the script and the killer robot and making MYSTERIOUS DR SATAN (1940). 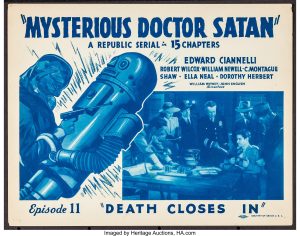 Meanwhile Republic opened negotiations with National’s rival publisher, Fawcett Comics, who agreed to license their stable of characters for no fee to the movie studio. Using the effects sequences they had prepared for Superman Republic produced ADVENTURES OF CAPTAIN MARVEL the following year.

The adaption took many liberties with the original series appearing in Whiz Comics; Billy Batson was no longer a twelve year old radio news reporter, instead he was a twenty something involved in an archeological expedition in the Middle East who encounters the wizard Shazam during this trip who reveals he is a guardian of an idol that a baddie wants to get his hands on, so Billy is given the power to transform into Captain Marvel whenever needed simply by uttering the wizards name. At the end of the serial, with the idol saved, Billy seemed to lose his power to transform and Captain Marvel appeared to return to whatever realm he’d originated from. 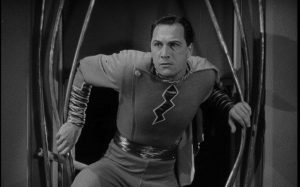 Changes aside, Frank Coghlin was good as Billy, seeming to be more in his mid to late teens, Coghlin had made a career playing delivery men, soda jerks and office boys. Cowboy actor Tom Tyler took on the role of Captain Marvel and his athletic build and straightforward mannerism made him an excellent choice. This version of Marvel lacks much of the humor the later comics would have sticking more closely to the character from his first appearance.  In the serial Captain Marvel dispatches his enemies with machine guns, falls from high places and even an engine block— making for an exciting adventure serial.

The bad guy is the masked and robed Scorpion who is voiced by character actor Gerald Mohr who had a long career in radio and would later play Mister Fantastic in the Hanna Barbera FANTASTIC FOUR cartoon in the 1960s.

In 1942 Republic released SPY SMASHER which was also based on a Fawcett Comic Book and in 1943 Columbia released the first adaption of a National Comics character with THE BATMAN starring Lewis Wilson ( a former student at Worcester Academy— a school less than 10 miles from Superworld’s own secret lair).