THE ORIGIN OF THE PENGUIN 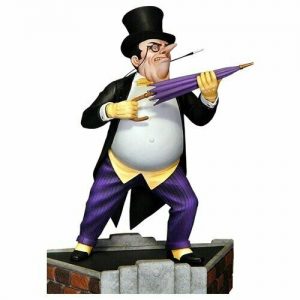 Batman bad guy The Penguin is enjoying a level of interest thanks in no small part to his appearance in Matt Reeve’s blockbuster film THE BATMAN (2022), as portrayed by actor Colin Farrell, is a far cry from The Penguin of the Golden Age Comics or even the version played by Burgess Meredith in the popular 1966 TV Series starring Adam West or the feature film of the same year.

Like most elements of Batman lore there is great controversy regarding the origin of arch villain The Penguin because as we all know credit wasn’t always given where credit was due when you were talking about cartoonist Bob Kane. Kane claimed that the idea for Batman’s diminutive but sharply dressed foe was solely his while his longtime uncredited partner Bill Finger says the credit belongs to him. 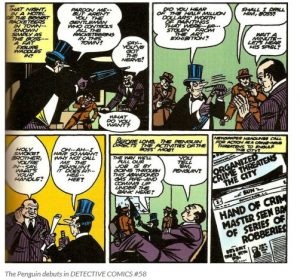 What can’t be debated is The Penguin made his debut in the pages of DETECTIVE COMICS #58 (Dec 1941) appearing as an art thief who manages to sneak a pair of priceless paintings out of a Gotham City museum in the handle of his umbrella which he used to prove his worthiness to a local mobster who allowed him to join his crew.   Falling out with the boss, The Penguin revealed that his umbrella is also a rifle and eliminated the mobster making himself crime boss. He leads the crew on several successful capers before running into Batman and Robin but escaping before they could capture him.

Writer Bill Finger said that he got the idea for the character after reading an article on Emperor Penguins and the job they fill in herding large groups of penguins on their annual trek across barren frozen wastelands. He liked the image of a large near man sized bird which looked like he was wearing a tuxedo as a villain and clipped the article (as he did with many stories he submitted) when he handed it over to Bob Kane. 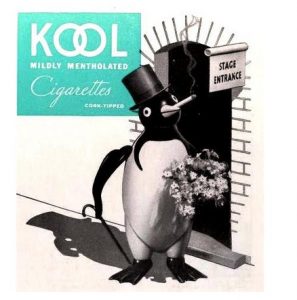 Kane, on the other hand, claimed that he came up with the idea of the character solely after seeing a magazine ad featuring Willie The Penguin who was the mascot for the Kool Cigarette Company. Kool was an early menthol cigarette and played up the “cooling factor” it gave consumers and even advertised for a time that they could actually help you get over a cold!

So which version is true? It’s hard to say. Kane was often known to stretch the truth, but the story makes sense and the ads were certainly all over the place. Finger was known as a deep researcher and a hoarder of news articles which might or might not be relevant to whatever he was working on at the time, and often included clippings whenever he turned in a script.

It’s likely in this case the truth lies somewhere between the two versions, but regardless The Penguin has truly cemented himself as one of Batman’s big four villains.

Superworld Comics has been in business for thirty years, buying and selling vintage comic books!  If you’ve got a collection you are ready to part with give us a call at the number listed at the top of the website, and be sure to tune in to Instagram for Superworld Live Shows;  Teddy’s Treasure Chest Tuesdays is on at 6pm and Lunch With Jose in on Thursdays at 1pm. Each show features great comic books at bargain prices and check out our website for thousands more books available!