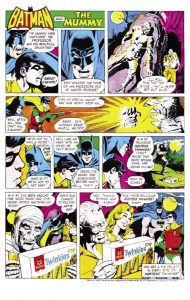 We all know Ted’s love of PSA’s in comics and while I like them too, because who doesn’t want to learn that old people can be your friend too, there’s nothing that tops the real star of Bronze Age Comics– The Hostess Comic Book Ads!

Starting in January 1975 in titles with an April cover date Hostess, the company responsible for unleashing Twinkies, Fruit Pies, the beloved Hostess Cupcake, probably Ding Dong’s and Suzy Q’s ran a series of ads featuring our favorite comic book characters from Batman to The Road Runner enjoying the sugary goodness of these highly processed but no less delicious lunch box essentials!   The first ad in the series was BATMAN AND THE MUMMY (Pictured above) in which the Dynamic Duo must stop a rampaging Mummy works only by giving him a box of Twinkies (after Robin fails with the Bat-Anti Mummy Ray Gun). 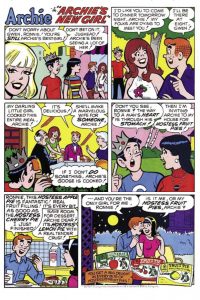 At the same time over in Harvey Comics Richie Rich was having his own troubles solved by a chance run in with some tasty snacks!   Archie Comics got into the act as Archie is lured by a new girl named Gwen only to be lured back to Veronica by some fruit pies (he must have never tried the Lemon ones). 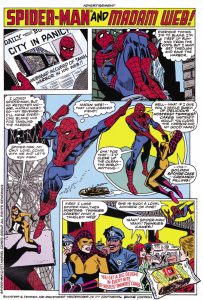 One of Spider-Man’s adventures with Hostess Twinkies included a run in with “Madame Web” in 1977– not the same character who would be introduced as a villain a few years later, this version was more Black Widow like in costuming and design but she was easily overcome by the lure of those golden sponge cakes! 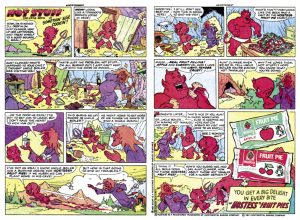 In 1981 the only double page spread Hostess Ad was presented in Harvey Comics with the little devil Hot Stuff! You would have thought he would have been a sucker for one of the devil’s food cake related snacks, but no, he loved the fruit pies too (didn’t we all?). 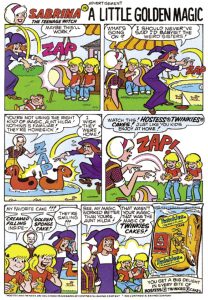 I couldn’t talk about the Hostess Ads without a mention of a character near and dear to my heart, and Sabrina the Teenage Witch appeared in several of the ads this one featuring Aunt Hilda and of course the magic of Hostess Twinkies! 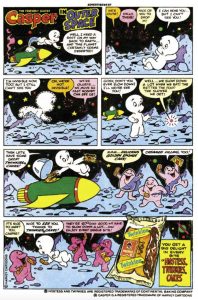 Casper traveled to outer space and met some aliens who were not going to scare Sigourney Weaver, and I wondered why a ghost needed a rocket ship to travel to another planet, but once again we’re too distracted by Hostess Twinkies to really wonder. 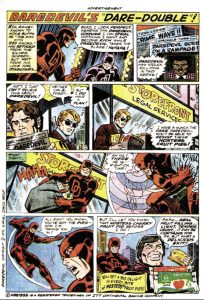 One of Daredevil’s adventures in snack advertising found hi with a Dare-double in an adventure that looked like it might have been drawn by Ross Andru. Some of the other very interesting ones included Road Runner in an adventure called HELTER SKELTER (too soon!) and Gold Key’s unfortunately named mascot Cracky.

In all the Hostess ads mimicked the writing style of Adam West’s campy BATMAN TV show but overall there were over 300 individual pages produced!  Wow!   Harvey Comics had the most ads coming in at 128 total while Richie Rich appeared in the most with 36– I guess it paid to have a lot of money to buy snack cakes.  Marvel beat DC with 87/67 but if you add up all the Batman related ads he dominates the superhero genre at 23.   Spider-Man who was then the star of his own live action TV series comes in with an impressive 22 ads while The Hulk, who also had a show has only 12.

Here’s a breakdown of appearances by Company & Character:

Josie (28) First one: Josie and the Cup Cakes

Jughead (1) First (and only) one: Jughead and the Best Sellers

Aquaman (7) First one: Twinkies and Kelp

Batgirl (2) First one: A Matter of Good Taste

Batman (16) First one: Batman and the Mummy

Flash (4) First one: The Stony-Eyed Medusa

Green Arrow (1) An Arrow in Time

Joker (3) First one: Clowning Around

Penguin (2) First one: The Cuckoo Cuckoos

Cracky (1) Time on My Hands

Tweety (4) First one: A Real Brick

Wendy (18) First one: Wendy and the Ugly Monster

The Thing (4) First: Thing and the Ultimate Weapon

Superworld Comics has been in business for thirty years, buying and selling vintage comic books!  If you’ve got a collection you are ready to part with give us a call at the number listed at the top of the website, and be sure to tune in to Instagram for Superworld Live Shows;  Teddy’s Treasure Chest Tuesdays is on at 6pm and Lunch With Jose in on Thursdays at 1pm. Each show features great comic books at bargain prices and check out our website for thousands more books available!