Who is the first Superhero? The answer depends on the specifics of your question. Back in  the 1930s when comic books were first published they were merely reprints of comic strips put into magazine form. In those days newspapers sold into the millions so having a popular  comic strip meant you had a huge readership. Eventually, publishers ran out of newspaper strips to reprint so they turned to artists who had not broken into newspaper syndicates to create all new original material and an industry was born. 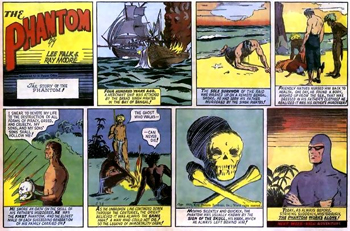 But back to the question; Who is the first superhero? According to the Guiness Book of World  Records that title goes to Lee Falk’s THE PHANTOM. The purple clad jungle hero made his  debut as a daily comic strip in 1936. He was the first character to sport tights and a mask and  his appearance was certainly striking.

The concept of The Phantom is that he is a generational hero, having taken on the role from his  father who had it passed on from his father and so on all the way back to the 1500s. This generational aspect was a unique concept and in the stories it gave him the appearance of being immortal.

The Phantom’s popularity continued into the 1940s where he was featured in a live action movie serial from Columbia Pictures in 1943— staying very faithful to the source material actor Tom Tyler (who had played Fawcett’s Captain Marvel in an earlier serial) looked like he had stepped right off the comics pages. He was given the identity of Geoffrey Prescott when he was out of costume while in the comics his real name had not been revealed. 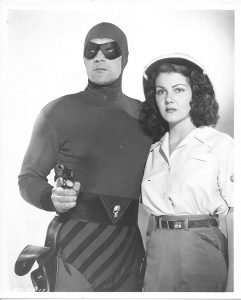 The Phantom appeared in comics first in ACE COMICS #11 (Feb 1938) where his comic strips  were reprinted. This predates ACTION COMICS #1 (June 1938) which featured the first  appearance of Superman, who is often cited as the first COMIC BOOK SUPERHERO, but you can make the argument that The Phantom still gets the title since those early Superman  appearances were recut from a proposed newspaper strip by creators Jerry Siegel and Joe Shuster.

In the 1958 Harvey Comics began publishing reprints of Phantom strips in HARVEY HITS and  the series later went over to Gold Key Comics followed by King Comics and then Charlton  Comics into the 1970s. The Phantom also has the distinction of having series published by both Marvel Comics and DC Comics in two different mini series. 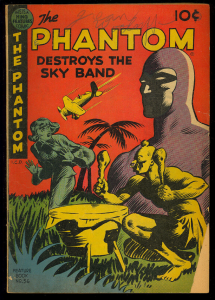 Currently The Phantom continues in comics from Moonstone Comics and Dynamite— although curiously his popularity in America is nowhere near what it is in other countries like Australia and all over Europe.

Maybe it’s the purple costume which seems to be out of place in an African jungle, in other countries he’s often depicted wearing grey or even red, but to true Phantom fans the Purple is a statement and there’s no stopping the world’s first superhero!