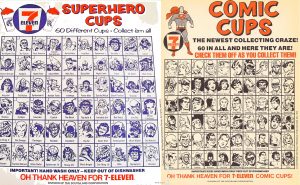 In the 1970s Comic Book Shops were few and far between, instead, we of the bell bottom and polyester shirt crowd rode our banana bikes to our local 7-11 to get our comics fill.   In the days when comic books were 20-25c cover price you probably had a few cents left to spend so 7-11 lured you over to their Slurpee ™ dispenser where you could choose from a variety of the cups being offered that week.    This was important for a number of reasons, first 7-11 made a profit on the frozen sugar drink and it ensured repeat business because you’d come back the following week to get whatever the new cup was because, as you know, you had to COLLECT ‘EM ALL!

The distribution of these cups depending a lot on your region; Some 7-11’s issued only one cup per week, while others offered a choice of several different cups.  Both DC and Marvel entered the licensing deal and cups were made from both sets of company characters. 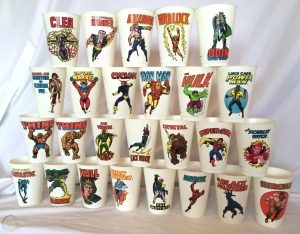 The most popular cups were the ones featuring the big name company characters, Superman and Batman for DC Comics and Spider-Man and The Hulk for Marvel.   That didn’t stop 7-11 from going deeper into the licensing option and some of the choices of characters being offered were pure head scratchers.   How many kids raced home from the mini market excited about the Martha Kent cup they’d just scored?   With no offense to Tarzan I doubt anyone in the Slurpee demographic cared about getting a Jane cup. 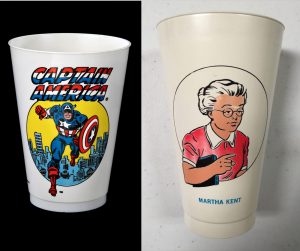 In the battle between DC and Marvel Cups it would seem that Marvel brought it while in some cases DC phoned it in.   While Marvel provided exciting pinups of their characters— even B-listers like Triton and Clea or “gulp” Super-Stan— DC often just provided an image from a comic panel so you’d get a Shelly Moldoff shot of Batman taking off his mask and handing it to Alfred for the Bruce Wayne cup or what looked like a model sheet for Superman’s Ex-Girlfriend Lana Lang.   Eventually DC dipped into more exciting pinup shots by the likes of Neal Adams bringing them up to Marvel’s level. 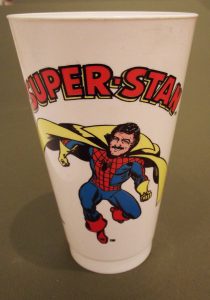 Slurpee didn’t just stick with superheroes in their promotion cups either, they also did series featuring Rock n’ Roll stars, Baseball Players, and into the 90s with The Simpsons.

Slurpee Cups are a fun throwback to a simpler time and although they can be tough to track down in nice condition (too many kids didn’t take the dishwasher warning seriously) they do show up and they can be a fun addition to your comic collection.

KEY CUPS TO LOOK OUT FOR 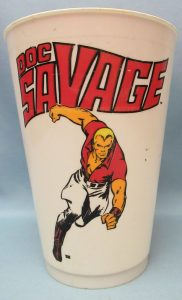 DOC SAVAGE – For a time Marvel held the license for both these characters and added them into the lineup.

JANE  – Although Tarzan is not a comic character first, DC Comics published his adventures in the early 70s (before Marvel would take over) so he and his better half get cups too.

Items like these will occasionally come in collections that walk through the door– although our inventory on the website is a niche market, we have various vintage collectibles up on our ebay store here.

We have a few of these cups in our inventory so if you’re interested send your waitlist or if you have any questions or comments regarding collectible comic books email us at ted@superworldcomics.com