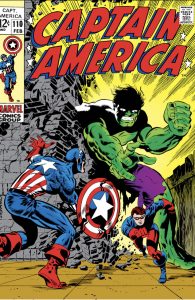 When Jim Steranko was let loose after starting with Jack Kirby’s breakdowns Marvel Comics knew they had a force of nature at loose. Steranko dominated Nick Fury Agent of Shield with amazing page layouts, design, storytelling, power and energy– the likes of which had never been seen before or since.

But it was when he took over for a couple of issues of CAPTAIN AMERICA that he really unleashed his pop-art super powers. It starts with the cover to #110 (Feb 1969)– which is easily among the best of Steranko’s long list of “bests”. Amazing composition, incredible color and pure energy! 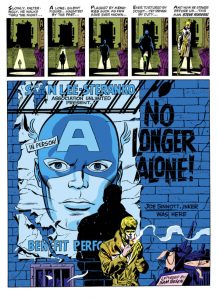 The opening page is full of Film Noir styling as a lone figure walks towards us from the shadows stepping into the light revealing Steve Rogers, the man who is secretly Captain America– and probably shocking today is the idea of Steve smoking at the bottom of the page, but it’s all to great effect. Steranko makes great use of the graphic of a Captain America personal appearance poster which helps to setup our credits. 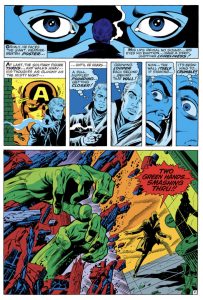 Steranko wastes no time in getting us into the action as two green hands smash thru a wall (as Steve Rogers points out in case we miss it) bringing our hero face to face with the green goliath in one of the most dynamic shots with it’s extreme dutch angle. Much can be said about the coloring, which itself is brilliantly done in a pop art style by Jim himself! 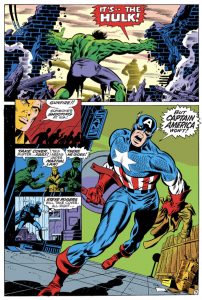 Steranko has Rogers in his Cap outfit in no time to face the Hulk’s rage as innocent bystanders make a run for the hills.  Steranko keeps the art simple with limited background pieces but enough to give us a sense of place. The action is so fast paced we don’t have time to wonder where Steve was hiding his shield. 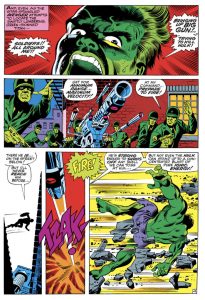 The power of rage in The Hulk’s face is emphasized by the burst lines and the strong red color in the background– but not to fear- the army is here! Cap does his best to get involved but not before the armed forces hit with a Hulk-Buster gun sending him hurling into a wall. 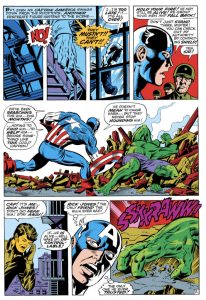 Cap uses his authority with SHIELD to shut the army down and he goes to the Hulk to make sure he’s still alive as Rick Jones arrives on the scene. Rick Jones would play a bigger role in Captain America, but that’s for another story, or at least later in this one.   As Cap gets closer, he see’s that the Hulk is indeed alive… 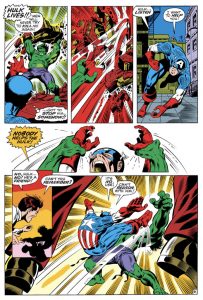 …and kicking– or in this case picking up huge chunks of wall to toss at Cap– who stops his plan with a simple throw of his shield before doing some kicking of his own.  It’s interesting to note that Steranko doesn’t make the Hulk overly giant, putting him in the Lou Ferrigno range of size but look at the energy in that kick– you can feel the power! 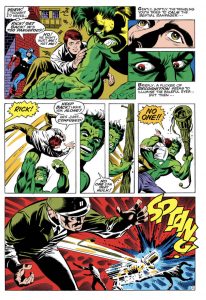 Rick goes to try and calm down The Hulk and maybe it’ll work, but maybe it didn’t and as the army is about to attempt another blast with the Hulk-Buster the Hulk takes matters into his own hands and fires a homemade missile at them that takes out the weapon before it can be used!

Wow, what a story! And there’s lot’s more but you’ll have to read it for yourself, because that’s all we can show right now. Jim Steranko is a master of his craft and this book shows that he deserves his spot on the Mount Rushmore of Comic Book Legends.