In honor of Veterans day, we look at famous characters of the Silver Age and Golden Age of comic books that have their origins associated with the military. These men, after their service, found themselves on a path of transformation; some for the cause of good and some in pursuit of evil. In any case, thanks to story lines deep-rooted in the training and discipline acquired in military service, or military-funded projects gone awry, we have some of the most memorable characters in the history of comic books. 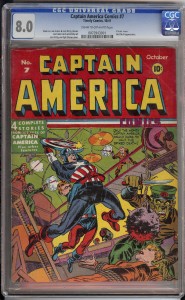 The Punisher: Frank Castle is a trained war machine with a resume that boasts the Marines, the US Army, the Navy and even the Australian Special Air Service Regiment. All this capped with a stint in the Vietnam War, and the loss of his family to the Costa crime family, one can see why a man would go “rogue.” First appearance: Amazing Spider-man #129 (1974).

The Thing: Before Ben Grimm’s fateful piloting of the space shuttle mission that mutated him, and his compatriots into the Fantastic Four, he served as one of the best pilots for both the United States Air Force and the Marine Corps. First appearing in Fantastic Four #1 (1961).

The Green Lantern: The Silver Age’s reiteration of DC’s popular superhero is Hal Jordan, a former US Air Force pilot in the Korean War, that receives the powerful ring from a dying alien Abin Sur, and undertakes his commission as an officer in the Green Lantern Corps. First Appearing in Showcase #22 (1959).

Red Hulk: Thaddeus E. Ross, otherwise know as General Ross, is a West Point graduate and eventually ascended to the rank of a three star general in the US Air Force. After his service in military campaigns, he came back state-side to supervise, among other things, Operation: Hulk. Eventually his hunt of the green menace, the Hulk, and his affiliations with the Gamma Bomb Project led to his creation as the Red Hulk.

Wolverine: The story of this military legend has been immortalized in print and film as the story Weapon X. The Wolverine is a soldier from our friendly neighbors to the north, serving under the Canadian Military and the Canadian Parachute Battalion during WWII. First Appearance: The Incredible Hulk #180.

Venom: Before his transformation via the alien symbiote, Venom, Flash Thompson had joined the US Army after high school and volunteered in the Vietnam War. The loss of his legs, below the knee, led to a physical and mental breakdown. The once proud and athletic Thompson bounces back  by being hired by the US government in an experimental use of the symbiote in a special “black ops” project. Thompson’s first appearance as Spidey’s high school bully was way back in 1962, in Amazing Fantasy vol.1 #15.

Nick Fury: Sergeant Nick Fury, a decorated leader of US Rangers in World War II is also the son of Jack Fury, a World War I pilot. His extensive military history made him select director of the espionage and counterterrorism agency S.H.I.E.L.D. First appearance: Sgt. Fury and His Howling Commandos #1 (1963).

We salute the men and women serving in our armed forces here and abroad. Contact us to learn which comic book titles would make great reading for the Veterans in your life.