Terrorism is a subject that has been tackled by the comic book industry much earlier than the rise of al-Qaeda and the events of 9/11. During the Silver Age of comic books super heroes, who had climbed to the upper echelon of the American comic book industry, began to lose some market share to horror, crime and romance books. News ripped from the headlines made great fodder for comic book story lines as well as the cultural evolution and repercussions inherent in the United States’ victorious role in World War II. A new kind of hero would emerge in this environment, with a new set of “contemporary” earthly enemies.

In a World War II series developed by writer/artist Jack Kirby and writer Stan Lee for Marvel Comics, Colonel Nicholas Joseph “Nick” Fury made his first appearance in Sgt. Fury and his Howling Commandos #1 (May 1963). This hard-nosed, cigar-chomping soldier was the leader of an elite U.S. Army unit which was stationed in England to fight missions primarily in the European theatre of WWII.

Following an early 60’s trend for action series about secret international intelligence agencies, Marvel would create S.H.I.E.L.D., (in 2014 interview Stan Lee admits being inspired by 1964’s television series The Man from U.N.C.L.E.). This elite US government espionage and law-enforcement agency debuted in Strange Tales #135 (Aug. 1965), as a feature story: “Nick Fury, Agent of S.H.I.E.L.D.” Appointed head of this CIA offshoot, Colonel Fury was revamped as slightly older, donning an eyepatch and leading an ethnically diverse group which included ex-members of the Howling Commandos, a Jewish hero, an African American soldier and some great female characters like Sharon Carter and Countess Valentina Allegra di Fontaine. Their task, to attend to a new powerful, threatening entity: HYDRA. 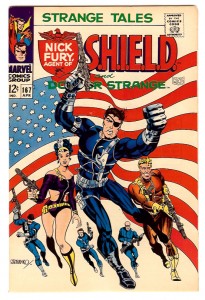 HYDRA provided the counterweight as a villainous terrorist network spearheaded by nefarious businessmen who worked against US interests in the shadows. At first lead by a short lived character Emir Ali-Bey, subsequently it was helmed by an old enemy of Fury’s, the German Baron von Strucker, a fanatic Nazi; cartoonishly designed with the stereotypical scar and monocle. HYDRA sought to control the world, specifically through using America’s technology and free society against itself. These early stories had SHIELD fighting HYDRA, as they developed and planned to use a “betatron bomb” (a weapon of mass destruction), with the aim of somehow “purifying” he world of what the enemy saw as America’s detrimental aspects, infidelity “free-love”, religious unbelief, consumerism and capitalism.

S.H.I.E.L.D.’s development has encompassed other notable characters of the Marvel Universe. Tony Stark, Iron man, was in charge of the Special Weapons Unit in its first appearance. Nick Fury tapped Dr. Bruce Banner to revive the “Super Soldier,” which created Captain America. This attempt to create a super serum also lead to the experiments that turned Norman Osborn into the Green Goblin.

This pivotal story continues to thrive. References in the Avengers films, as well as Thor, and it’s own dedicated show on national network ABC, speak to the staying power of espionage intrigue and militarized lawmen in pop culture. Contact us and be sure to continue to seek out the titles that we’ve mentioned, and others, that have developed S.H.I.E.L.D. and produced such rich backstory. With the current crop of global enemies and terrorist factions grabbing headlines, you can be sure that Nick Fury’s troops will have plenty of work to do in the pages of the Marvel Universe.