SUPERWORLD LiVE!  Behind the Scenes

With the Pandemic in full swing and In Person Comic Book Conventions out of the question the team at Superworld needed to do something to make up for the lost revenue at shows.  In stepped Super Leader Ted VanLiew decided he’d like to do a live show via Instagram where he would get to interact with his customers like he would at cons.

The process for creating and producing the shows fell to the rest of the team, Lisa VanLiew, Jose Rivera, Joe Fish and Adam Fish all took a look at what they thought worked and didn’t work at other similar type shows being put on by other comic dealers. Eventually it was decided that the show would be called TREASURE CHEST TUESDAYS complete with a treasure chest and Ted would reveal the hidden contents of both the wall and the chest over the course of the episode.

The first show aired on October 6th and in those primitive days of 2020 Instagram only allowed a 45 minute broadcast and anyone who knows Ted knows once you get him talking about comics 45 minutes covers one book so it was decided these shows would be two parters with the first installment from 6-645 followed by a second part immediately thereafter. 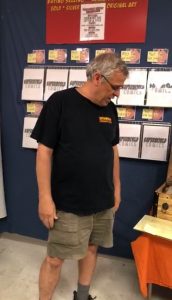 Ted on that first show before realizing it helps sales when he wears pants.

There were bumps along the way including the infamous collapse of the wall of books which because the most watched episode of the series for a time being, but before long the team was making the show look like a well oiled machine. A second wall was added as well as two giveaways drawn randomly from anyone in attendance.

Instagram relaxed its allowed running time which negated the need for two parters and Ted’s show, filled with trivia, nostalgia and good natured humor found a steady audience. Ted has made a number of appearances on another Instagram show run by Elite Comics which has brought in some additional viewers to the Superworld Show’s each week.

Ted’s show became so popular that a spinoff series was soon launched, LUNCH WITH JOSE started airing Thursday’s at 1PM, promising debauchery the show delivers a good amount of laughs and trivia with Jose Rivera.

While Ted’s show is more of a buffet of comics, Jose prefers to have a theme which he works out well in advance but is usually fine tuned with the show’s producer Joe Fish. Often the theme for the next show is discussed just as this week’s show has ended, other times they’ll base a theme on what they have pulled out of the collection before seeking additional issues to fit.

To give you a behind the scene’s look at how the show is put together I stopped by for the April 1st episode. 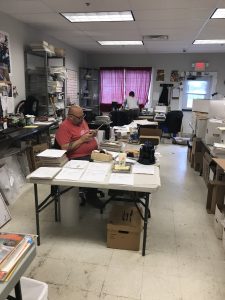 Jose Rivera finalizes his picks for his Live show.

For LUNCH WITH JOSE Jose and Joe Fish pick the final books for the episode making sure the issues fit with the theme that week, this time around its PLANET OF THE CAPES. 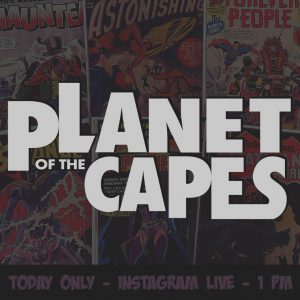 In the Golden Age of Comics almost every superhero sported a cape, in the Silver Age to the present day capes have become less of a fashion statement for the four color characters. 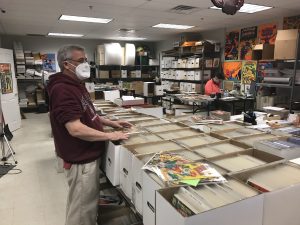 Ted picks some books from the Superworld inventory.

The books chosen are mostly from the main Superworld comic inventory but many times items that are not yet on the website will make it into the sale including some Slurpee Collector Cups and many of the 1960s and 70s paperback reprints. 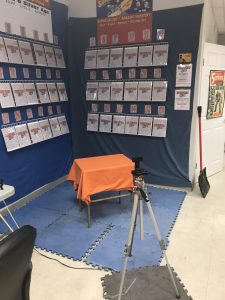 The Superworld Live Stage— like Dooley Wilson’s piano in CASABLANCA, the table is much smaller than it looks on the screen. 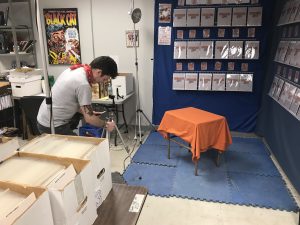 Adam is the camera man for all of the Superworld Live Shows.

Adam is the first one over to the stage area where he sets up his iPhone on a tripod and double checks to make sure all of the technology is working before show time. 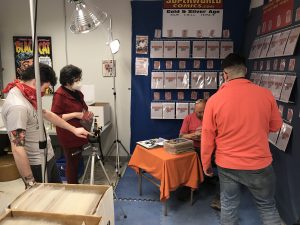 Adam, Lisa, and Joe up to shenanigans on Jose.

Since the show aired on April 1st— the show couldn’t run without a prank. For reasons we can’t explain Jose is repulsed by Amazing Spider-Man #138 — here is the photographic evidence of Lisa VanLiew sneaking the book into the pile of comics while Joe distracts Jose seconds before the show starts. 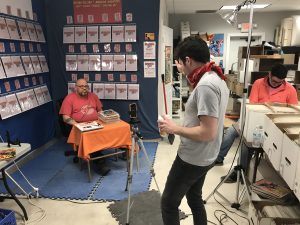 Adam gives Jose a countdown as he starts the live feed.

Jose is pretty chill as they count down to the show— as is the rest of the team. I imagine things were a little more tense when they had less episodes under their belt. 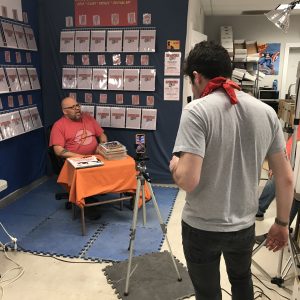 They roll into the show as viewers and customers check in. For the host, you have to be quick on your feet, remembering the details of the book you’re offering while deflecting whatever barbs are being launched at you while the show runs. It’s good natured ribbing which makes for a lively show. 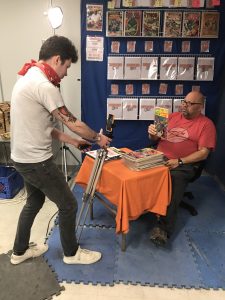 Adam zooms in for a closer look at the book Jose is offering up. 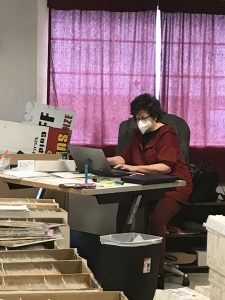 Lisa monitors the chat, during Treasure Chest Tuesday she writes down all the attendees names for the drawing. 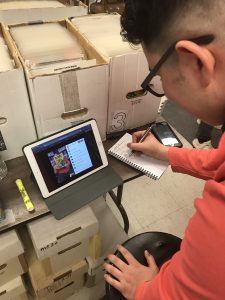 Joe tracks sales and questions as well as managing the wall display.

One of the obstacles for the live shows is that a lag exists and it makes no difference how close you are because the iPad in the office which keeps track of everything was about 20 seconds behind. Sales are handled by a CLAIM and the price in the chat area, the addition of the needed price is so that viewers can be sure nobody is jumping the bid.

Joe makes notes about who has claimed a book and invoices will be sent to buyers via DM in Instagram. 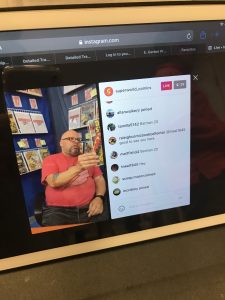 Joe’s iPad is the official word for sales. 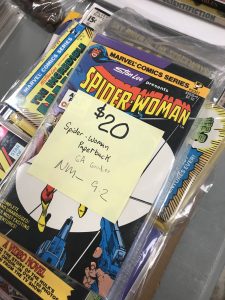 Orders are recorded in a book and on the sales tag. 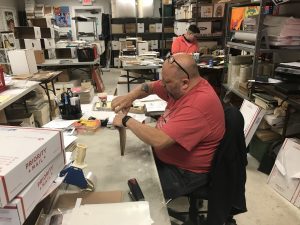 Jose in the shipping center.

Once the show ends the books that have been bought are packed up and shipped out to the buyers. 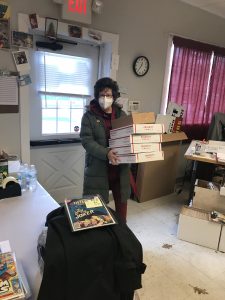 And with that the show is over and the business of regular work can be resumed, work already begins on what will be the next episode.

The shows offer a great bunch of bargains as well as a fun way to pass the time looking at great old comics.