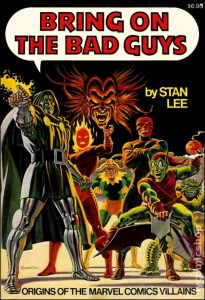 Debate time; Who is the Greatest Villain in the Marvel Universe? We fanboys (and gals) like to pontificate over the various attributes that make a character Numero Uno for us— your mileage may vary and like all opinions everything is subjective but here is mine.

Let’s assemble a Mighty Marvel List of The Great Bad Guys and go from there;

1- Galactus.   First Appears 1966.   Galactus might clearly be the MOST POWERFUL villain in the Marvel Universe, having the ability to devour entire planets the way the rest of us down a #7 Chicken Sandwich combo from Burger King, but the question remains IS he a villain?   It’s hard to argue that he is when he does what he does simply to survive.   If the bacteria that exists on said Chicken Sandwich has a comic book publishing house are we not the villain in their story?   Not a villain.  Great character, brilliant design, not a villain.  Disqualified.

2- The Green Goblin.  First Appears 1964.   The Goblin has been called Marvel’s Joker— not sure I agree with that one.   Norman Osborn is a master of industry and a sometimes really evil dude, the fact that he’s the father of Peter Parker’s best friend adds an element of drama to the whole multiple personality thing.   He’s killed Spider-Man’s girlfriend, he’s done a lot of bad guys things.  Contender.

3- Thanos.   First Appears 1973.   Thanos is a major contender.   His goal is to destroy the Marvel Universe in an effort to impress his major crush, Death.   The biggest downside to Thanos is that creator Jim Starlin admits that he was heavily influenced by Jack Kirby’s Darkseid.   Can a character so heavily based on a rival company’s character be truly worthy of the title?   Hmmm.

4- Doctor Octopus.   First Appears 1963.   Doc Oak might not be world conquering, a titan of industry, or even the sharpest dresser, but it’s hard not to argue his greatness as a bad guy.   He’s been menacing Spidey since (almost) the beginning and he’s nearly married Aunt May a couple of times so he’s definitely a world class villain at least to Spider-Man.

5- Magneto.   First Appears 1963.   Master of Magnets, real threat to mankind because let’s face it mutants are superior.   He’s a great villain no doubt but like Galactus sometimes you really have to wonder if he’s truly a villain.

6- The Red Skull.  First Appears 1941.   The Red Skull is certainly cool, but he’s so closely tied to WWII and Adolf Hitler that it makes him somewhat a man out of time.  It doesn’t help that he’s been more than one person through his career, and often he was merely a lanky in a bigger plot i.e. World War II, so yeah he wants to be the greatest but he’s just not.

7- Ultron. First full appearance 1968.   He got a boost from the movie but we aren’t looking at movies here.   He’s too much like the Star Trek supercomputer that Captain Kirk tricks in the original series.   Makes him derivative and a little dull.

8- Doctor Doom.  First Appears 1962.   Here he is.  The GREATEST villain in the Marvel Universe.   Doom is not only a villain, he’s the ruler of his own country.  He’s at time got diplomatic immunity.  He’s sincerely poised to take over the world.  In short, he’s the Greatest Villain in the Marvel Universe.  The fact that the movies can’t get him right only adds to his title because it’s hard to nail down this guy.  It’s hard not to argue that Doom’s influence can be seen in Darkseid who himself influenced Darth Vader.   There’s no Vader without Darkseid and there’s no Darkseid without Doom.

So there you have it, my thoughts for greatest Marvel Villain.   Feel free to let us know how wrong we are! 😉

Look for these comics of note featuring these characters;

Silver Surfer Parable 1 and 2 – By Stan Lee and Moebius

The Silver Surfer Graphic Novel by Stan Lee and Jack Kirby – retelling of the Galactus origin.

39-40 – Goblin learns Spider-Man’s Identity and reveals his own.

96-98 – Infamous “drug” use issues banned by the comics code

Be sure to check the website for great books featuring all of these characters and tune in on Instagram on Tuesday at 6PM EST for Treasure Chest Tuesdays with Ted and on Thursdays at 1PM EST for Lunch and Debauchery with Jose.