Have you ignored the world of golden age comic books because you associate it with bland, morally simplistic stories? Sadly, this understandable misconception has fueled comic book fans for decades and it didn’t have to be that way, if it wasn’t for the “Comics Code.”

In the earliest stages of comic book history, the sky was the limit. There were no established tropes and guidelines towards creating a story line or character. That’s why we got strange moments, like Batman wrestling a giant cat or characters named “Lady Satan.” 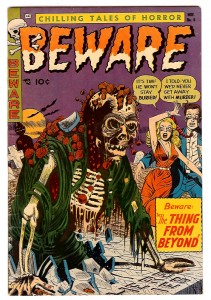 The highly creative geniuses that fueled the Golden Age were making it up as they want and creating masterpieces in the process. Entire universes were crafted in a few simple panels and superhero legends that still haunt our theaters got their early and unique starts.

There were moments of horror, moments of science fiction insanity, and even cowgirls riding the plains fighting crime. Perhaps most surprisingly, villains were sometimes shown to be noble, even sympathetic, characters.

Unfortunately that all came to an end in 1954 when the “Comics Code” created a stringent series of rules that greatly limited what could and couldn’t be said by comics.

This code was headed up by a New York Magistrate named Charles F. Murphy. He forced comic book writers and publishers to limit themselves to stories that followed rules that stated criminals couldn’t be sympathetic, romance stories had to honor marriage, all government officials are respectable, and the elimination of all horrific elements.

Almost overnight, the wild experimentation and exploration of the Golden Age disappeared and turned into the unfortunate conservatism that many still associate with the period. It’s a shame that we’ll never know the wildness the Golden Age could have created without that code. Of course, the pre-code horror and science fiction is extremely collectible!

If we’ve tickled your fancy about some of the wilder moments in Golden Age history, please contact us to learn more.