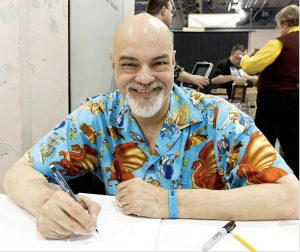 George Perez burst on the scene in the 1970s when he was assigned to THE AVENGERS for Marvel Comics.  His ability to render highly detailed and what would be over-crowded panels by another artist made him a perfect choice for a large roster team book.   Perez enjoyed his time at Marvel but when his friend and collaborator Marv Wolfman asked him to come with him to DC Comics for THE NEW TEEN TITANS he jumped at the chance and made that title DC’s best selling title for many years, rivaling Marvel’s X-Men sales.   Secretly Perez had agreed to the Titans gig in the hopes of landing JUSTICE LEAGUE OF AMERICA after the death of long time regular artist Dick Dillin. Perez got the assignment and continued to work on it while he did TITANS where he earned countless awards. 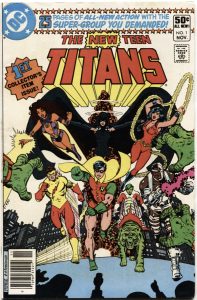 In 1985 Perez took a leave of absence from THE NEW TEEN TITANS to join Wolfman on the ambitious DC Comics 50th Anniversary event, CRISIS ON INFINITE EARTHS which brought all of the multiple DC Comics “Earth’s” together in an attempt to streamline 50 years of continuity. It also featured every single character DC Comics owned and was notable for the deaths of characters like Supergirl and The Flash which shook fandom to it’s core and stayed the status quo for many years to come.

It was around this time he began work on a JLA/AVENGERS crossover but cooperations between Marvel and DC were breaking down and the concept fell into disarray.  It would eventually be published many years later as a hardcover edition. 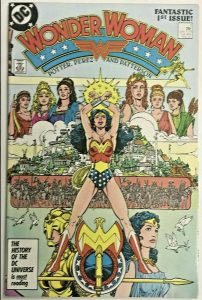 In 1987 Perez was tasked with the reboot of Wonder Woman which followed the earlier reboots of Superman by John Byrne and Batman by Frank Miller.   Initially Greg Potter wrote the series but like Miller on Daredevil, Perez eventually took over the full writing chores as well.   Perez stayed on WONDER WOMAN as the artist up through issue #24 but stayed as writer until issue #62.

Perez’ mark was felt across the spectrum of DC’s stable, designing the iconic battle suit Lex Luthor wore in the 1980s as well as in the Kenner Super Powers toy line. 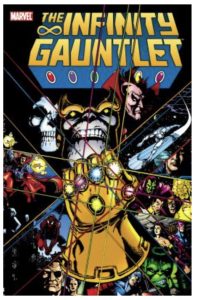 After many happy years with DC things hit a snag in 1991 when editorial problems began to kick in.  Perez felt DC wasn’t giving Wonder Woman’s 50th Anniversary the attention it deserved and he objected to the WAR OF THE GODS storyline not getting newstand distribution.   Marvel Comics called and offered him INFINITY GAUNTLET which was to be written by Jim Starlin but this time he found working for both Marvel and DC at the same time extremely stressful causing him to leave GAUNTLET partway through #4 so Ron Lim was brought in to finish the series.

In the 1990s Perez began working on smaller titles including the comic adaption of the hit film JURASSIC PARK and HULK: FUTURE IMPERFECT with writer Peter David.   He worked as writer on SILVER SURFER Vol 2 in 1995-1996 before returning to THE AVENGERS with writer Kurt Busiek.

Perez was back at DC Comics in the early 2000’s working on THE BRAVE AND THE BOLD and INFINITE CRISIS, while 2011 found him writing and doing breakdowns on a new SUPERMAN series which only lasted until 2012 when editorial dictates once again created a friction that made it impossible for him to continue.   Perez tried to work out his differences with them but found few answers to the questions he would ask. 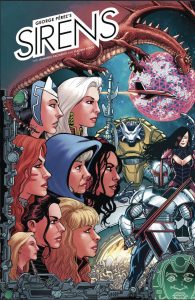 In 2014 Perez jumped into the creator owned universe and published SIRENS with BOOM STUDIOS before announcing in 2019 he was retiring due to various health issues.