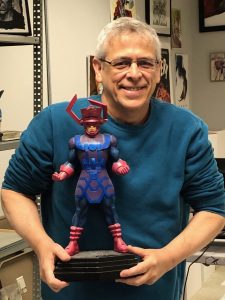 Ted and his Galactus statue

Customers have made offers for Ted’s Galactus statue that has been sitting on his desk for 12 years, but he says”no way” even though Galactus’ “hockey sticks” occasionally go crooked!
Galactus is another great character that is rumored to be appearing in some new Disney/Marvel movies or series. The scarfer of planets, Galactus requires energy from the life force of planets. He first appeared in Fantastic Four #48-50. It was supposed to be his only appearance, but fans gobbled up comics about him, and he became a firm part of the Marvel universe. 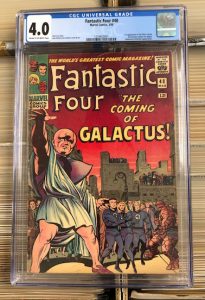 Buy this CGC graded copy here!
He spared the planet of  Norrin Radd in exchange for a promise to help Galactus find suitable planets to eat. Galactus transformed him into a being of pure energy  to aid him in his quest.  And so, Silver Surfer became the herald of Galactus or as Joe and Jose said ” his nutritionist.”
“Galactus in actuality is a sort of god. He is beyond reproach, beyond anyone’s opinion. In a way he is kind of a Zeus, who fathered Hercules. He is his own legend, and of course, he and the Silver Surfer are sort of modern legends, and they are designed that way.”  said Jack Kirby
Superworld had some fun with Galactus and Surfer in our 2014 Xmas card. In the Galactus Holiday Assortment we gave them some sweet planets. Don’t forget to read the nutrition label! 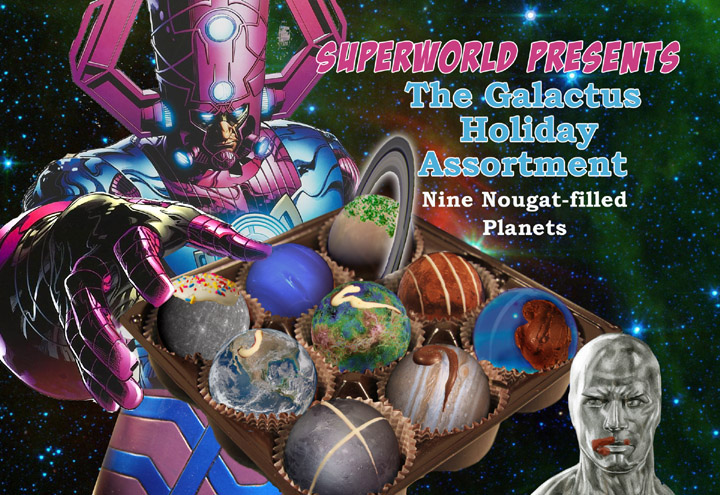