FLASHBACK!  Let’s take a look at the comics that share your birthday! Cover date and year of when you were born (note these were not necessarily the books on the stands since comics usually have a three month lead time for sales)  I’m going to start with the Superworld Team, but if you, faithful reader, would like your birthday spotlighted send me your First name, birth month and birth year to andy@andytfish.com and I’ll make it an upcoming post. 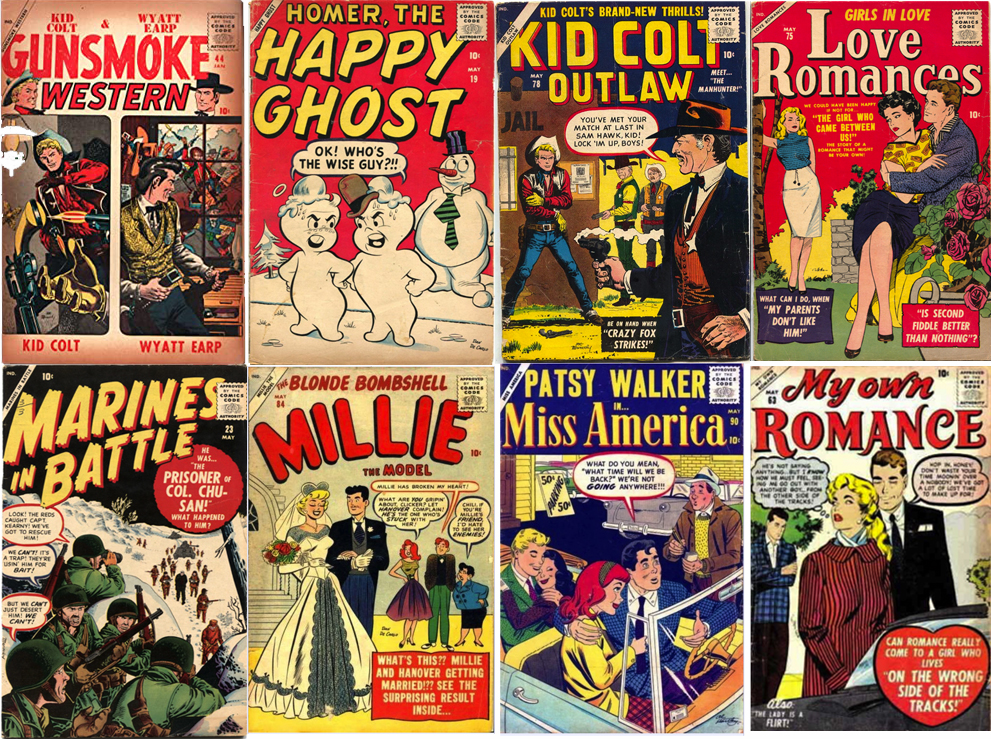 Let’s start with the Teddy Big Kahuna’s birthday May 1958- he’s a Marvel Guy, so I’ll start with those but I’ll include DC, Archie and Harvey too because Marvel Comics in the spring of 1958 was far from the powerhouse they would become in just a few short years:

During this period, Marvel Comics was really struggling, Stan Lee was essentially the only in house employee and with the comics code destroying sales of horror comics and superhero comics having gone in decline after World War II they desperately tried to stay afloat with westerns, humor, romance and war comics.  Boy that gunman in the KID COLT OUTLAW looks a lot like actor Lee Van Cleef who would later go on to star in Spaghetti Westerns with Clint Eastwood–and it’s very possible because Lee got his start in 1952’s HIGH NOON and by 1958 was a frequent guest star on TV Westerns.   In May of 1958 Marvel Comics only had 8 comics on the stands which is the least of any of the publishers.

All American Men of War #57

Tales of the Unexpected #25

DC Comics, at this point known as National Comics, was the powerhouse for comics publishers in 1958 with 32 titles on the stands at any given month.   It’s worth noting that SUPERMAN was their biggest character, still reaping the benefits of George Reeve’s ADVENTURES OF SUPERMAN TV Series which was still airing in syndication in 1958.  BATMAN was only being published bi-monthly at this point while things would reverse for the two characters in just under ten years with the Adam West BATMAN TV Series.

While DC Comics continued to be a superhero publisher with a focus on Superman, Batman and Wonder Woman, which was unique for the time, they were not their focus with a wide range including humor, licensed characters such as Sergeant Bilko based on a popular TV Series starring Phil Silvers.  Other licensed characters included Rex the Wonder Dog, Jerry Lewis, Charlie Chan, Mr District Attorney as well as a few others who didn’t have a May issue that year.   Other genres included War and Western Titles, Sci-Fi and movie based comics.

Out of This World #8

Robin Hood and His Merry Men #37

This Magazine is Haunted #16

Charlton Comics in Connecticut around 1958 was a massive 71 acre complex.

Charlton Comics, never a powerhouse, was still a healthy publisher with a wide range of titles.  Charlton was very much like a farm team for DC Comics with many creators like Jim Aparo, Dick Giordano, Denny O’Neil and many more.   Charlton was unique in that it’s massive complex printed and distributed their own comics directly from their own warehouse.

Titles produced by Charlton covered a wide range of genres

Ben Bowie and his Mountain Men #15

Dell Comics was the no-flash comics company– often featuring great covers with mediocre comics they were on the bottom of the pile of most kids comic stacks, but they stayed around for a long time.

Archie Comics had been around since 1939 and had pretty much cornered the market on Teen Comedy hijinks, the success of TV Series like MANY LOVES OF DOBIE GILLIS owed a lot of their influence to Archie Andrews and his friends.

Sad Sack and the Sarge #5

Harvey Comics was the little company that could, and did, publish a variety of licensed comic properties including the popular Terry Toons characters like Baby Huey and comic strip superstars like Blondie and Dagwood and the ever popular Dick Tracy.

Superworld Comics has been in business for thirty years, buying and selling vintage comic books! If you’ve got a collection you are ready to part with give us a call at the number listed at the top of the website, and be sure to tune in to Instagram for Superworld Live Shows;  Teddy’s Treasure Chest Tuesdays is on at 6pm and Jose’s Show on Thursdays- check @superworldcomics Instagram account for show times.

Each show features great comic books at bargain prices and check out our website for thousands more books available!