After the Comics Code shut down the early experimentation of the Golden Age of comics, the Silver Age was born. This glorious (and silly) period lasted from about 1954 to 1970. The times were changing and the comic world could no longer ignore the problems that had plagued the end of the 60’s and which continued to plague America.

Let’s start with the shocking cover: Green Lantern, reciting his oath, is joined by the Green Arrow in DESTROYING THE ACTUAL LANTERN. Such an unbelievable cover indicated that this comic was going to be very serious. And it was. 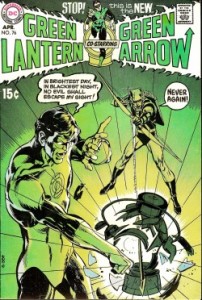 The major conflict of this story revolves around a crisis of conscience suffered by Green Lantern when he stops a young teen from attacking a businessman. His “status quo” attitude is challenged by the Green Arrow, who indicates the businessman was a slumlord looking to tear down the kid’s apartment.

The Lantern is torn: on one hand, what the man is doing is perfectly legal and he is sworn to uphold the law. But on the more important hand, it’s strictly immoral and unethical. The slumlord is brought to justice after bringing a hit out on Green Arrow, but the Guardians aren’t happy with Green Lantern’s behavior.

However, once the Guardians visit Earth and see the vast inequalities, they are appalled. They are confronted by greed, poverty, and rampant racism.

Once this comic was released, the Silver Age had no chance of surviving. Soon, socially aware comics were popping up all across the country. The days of turning away were over…as was the Silver Age. So thank writer Denny O’Neil and artist Neal Adams for that one!