Comic books have provided many of us with hours upon hours of entertainment (although some may be reluctant to admit this). Equally entertaining are the bits of weird and amusing real world news that relate to our favorite silver and golden age comic book characters (and not all of the notably weird stories take place at Comic-Con). Check out a few random, unusual facts you may not have known about your favorite comics:

1. Darth Vader modeled after Doctor Doom? If you’ve seen the first Star Wars trilogy as many times as the rest of us, you’ve probably noticed some striking similarities between Darth Vader and Doctor Doom (and if you haven’t, go back and watch again after reading this blog). First of all, just do a side-by-side comparison of the two-the build, the body language, the mask, the cape, the body armor….. The fact that Lord Doom sported a hood while Lord Vader rocked a voice-altering helmet is but a minuscule difference in the grand scheme of things. In addition to the physical similarities, they share several character traits as well. Just imagine if Darth Vader had been given an Infinity Gauntlet in addition to his force powers? 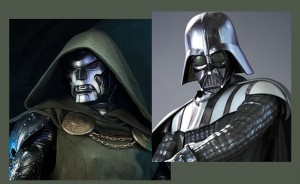 4. No one can beat Lou Ferrigno. Apparently no one can roar quite like a big, green Lou Ferrigno. There was trouble on the set of The Avengers movie when Hulk’s roar sounded-dare we say-a bit wimpy? Since the Hulk’s roar didn’t sound quite right, producers decided to supplement the sound with recordings of Lou Ferrigno’s thunderous bellowing from the original Hulk.

5. Stan Lee’s Superman? In 2002, Stan Lee delved into the world of DC comics and wrote his own take on DC’s most popular characters. His series, titled “Just Imagine Stan Lee“, consists of 15 cleverly reimagined origin stories for Superman, Batman, Wonder Woman, Green Lantern, The Flash, and Aquaman, among others.

Please feel free to contact us for more information on your favorite silver and golden age comic book characters.