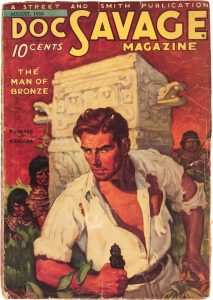 Introduced in the pages of Doc Savage Magazine #1 in March 1933 Doc Savage took the world by storm with his superhuman feats and outlandish adventures. Created by Street & Smith editor John L. Nanovic and publisher Henry W. Ralston with some contributions from the man who would be the series main writer, Lester Dent, Doc Savage rights wrongs and punishes eveildoers from his sanctum headquarters on the 86th floor of New York’s Empire State Building.

Nanovic and Ralston were looking to capitalize on the amazing pulp success they were having with THE SHADOW and went in an opposite direction from that character who existed in the shadowy dark alleys and battling secret societies outside the realm of everyday life, Clark “Doc” Savage on the other hand, existed out in the daylight and was very much a public figure.   As he raced through the city in his super-powered roadster passer by would stop and admire “The Man of Bronze” who was very much a perfect superman. 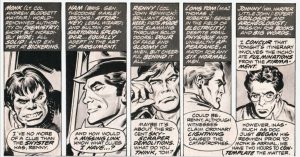 Doc’s world was populated with a team of assistants which made the title almost a team book and each assistant had his own unique abilities and appearance.  Doc’s biography shows that a team of scientists assembled by his father worked with him to train his mind and body to superhuman levels which allowed him to face impossible odds and to come out victorious.   Some of Doc’s most notable adventures included battles with Werewolves, man made monsters, and even demons from the center of the Earth.

The series ran from 1933 until the Summer of 1949 when it ended but Doc returned in the 1960s in the form of paperback reprints that were blockbuster sellers and this lead to all new Doc stories and novels from the likes of writers like Will Murray and Philip Jose Farmer writing under the by-line of Kenneth Robeson.  The paperbacks introduced artist James Bama’s reinterpretation of Doc.  In the original adventures he was conservative in appearance, with striking blonde hair but looking more like a movie star, in these new images Bama gave him an intense widows peak and more of a buzz cut for his blonde hair.   It’s this version of Doc that most fans think of when his name comes up. 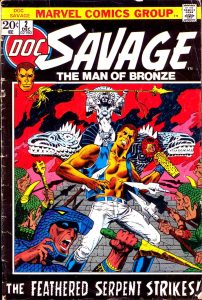 Doc’s comic book history included Street and Smith Comics during the Golden Age first as a backup feature in THE SHADOW Comic Book and later in his own title for 20 plus issues as well as an appearance in the June 1943 issue of Supersnipe Comics #9.   In 1966 Gold Key Comics released a one issue adaption of The Thousand Headed Man which was a proposed Doc Savage movie which would have starred THE RIFLEMAN’s Chuck Connors. 1972 saw Marvel Comics bring Doc to modern audiences with an all new series featuring some of their top creators– the series only lasted until 1974 but in 1975 Marvel moved the character into their Black and White Curtis Magazine line releasing eight issues.   Doc teamed up with the Fantastic Four’s Ben Grimm in MARVEL TWO IN ONE #21 and with the web spinner in GIANT SIZE SPIDER-MAN #3. DC Comics brought a Doc Savage mini series in 1987 before bringing Doc in for a guest appearance in their successful comic book THE SHADOW STRIKES as a crossover.

In 1975 Ron Ely played the character in a “big budget” slightly campy movie version in DOC SAVAGE, THE MAN OF BRONZE. Currently in Hollywood a Doc Savage film has been in development for many years previously attached to Arnold Schwarzanagger and currently tied to Dwayne “the Rock” Johnson.