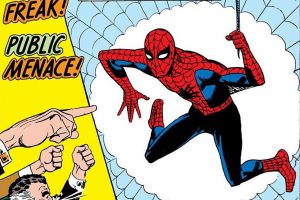 The character of Spider-Man was developed as a follow up to the immensely successful FANTASTIC FOUR which had single handedly revived Marvel Comics and changed it’s fortunes. Initially the editor, (and cousin of the publisher) Stan Lee enlisted FF Artist Jack Kirby to bring the character to life but when the first few pages came in Lee decided he needed an artist who had less of a heroic style and more “everyman” so he turned to another of his artists, Steve Ditko.

Ditko’s contributions to the character were many, and we’ll look at those in another issue, but Lee was happy with the work and the character was unleashed onto the world in AMAZING FANTASY #15 (Sep 1962) followed by his own series AMAZING SPIDER-MAN just six months later.

Lee’s method of writing was to come up with a simple plot to keep his artists working rather than waiting for a full script.  Ditko was well versed in this method, having worked for Marvel for many years.   In Lee’s own words: “All I had to do was give Steve a one-line description of the plot and he’d be off and running.  He’d take those skeleton outlines I had given him and turn them into classic little works of art that ended up being far cooler than I had any right to expect.” 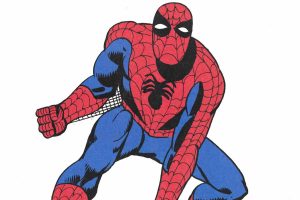 As Spider-Man’s popularity grew so did his profits, all of which benefited Marvel.  A line of merchandising, an upcoming animated series combined with Stan Lee’s famous hyperbole in making himself the face of the company’s growing popularity both in pop culture and college campuses began to ferment some resentment among his creative partners who were not compensated for their contributions beyond their initial page rates.

Ditko’s contributions were recognized starting with AMAZING SPIDER-MAN #25 (Jun 1965) where he was given co-plotter credit but it may have been too little too late because he and Lee had stopped speaking.   At this point all correspondence between the two was handled by assistants and production managers. 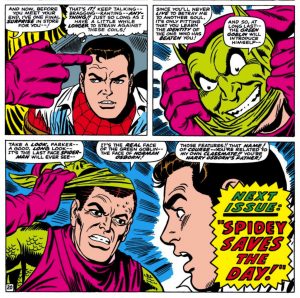 The dramatic reveal of The Goblin’s secret identity from ASM #39- art by John Romita Sr.

The popular myth is that the event that lead to the dissolution of their partnership was the revelation of the identity of The Green Goblin.    The myth further states that Lee wanted to reveal the secret identity of the villain, which had been a point of mystery in ASM for several years, be a member of Spider-Man’s supporting cast because anything else would be a cheat, while Ditko wanted the reveal to be someone the readers had never seen before to keep with the realism they had established for the strip. 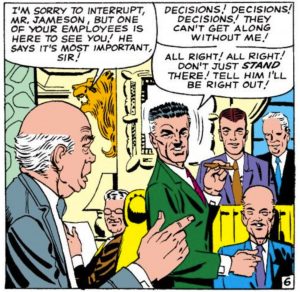 To the right of J Jonah Jameson is this unnamed man at the business club, is this Norman Osborn?  From ASM #23

Lee claimed he couldn’t recall what lead to the split, and Ditko disputes the argument that it had anything to do with The Goblin, even pointing out he had begun introducing the character of Norman Osborn (who would eventually be the reveal) in ASM #23 with subsequent cameos in #25 and #26.   The character wouldn’t be named and identified as the father of one of Peter’s classmates until ASM #38 (Jul 1966)  which would be Ditko’s final issue.  Ditko left Marvel Comics and never would draw Spider-Man again. 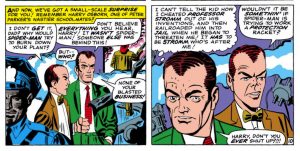 Ditko said the communication was broken off by Lee.   Lee said he couldn’t remember why Ditko stopped talking to him.    There are two sides to every story but since Lee claimed he couldn’t remember I turned to the Wayback Machine at archive.org to see what I could find, and lo and behold this article which ran in the fanzine THE COMICS written by Ditko himself; 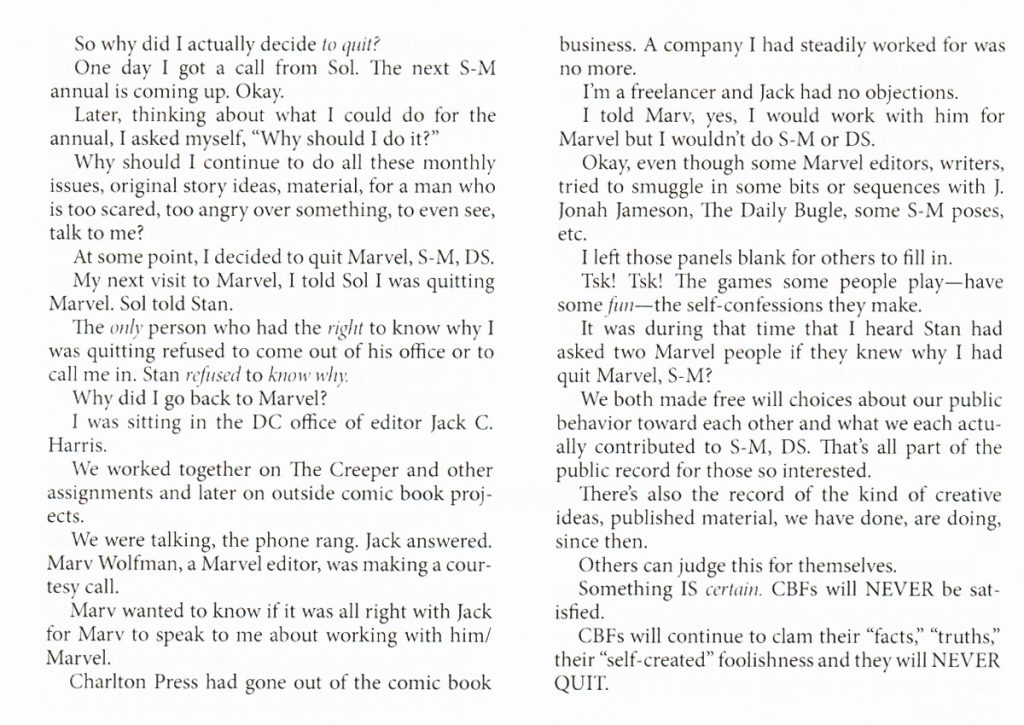 Check out our selection of back issues at superworldcomics.com for these and other great comics featuring some of the world’s best characters.   If you have any questions or comments regarding collectible comic books email us at ted@superworldcomics.com

Books to look for:

To find our selection of Spider-Man issues we have in stock, you can click this link right here.

And remember to tune in to Instagram Live Tuesdays at 6PM EST for TREASURE CHEST TUESDAYS with TED and on Thursday at 1PM for LUNCH AND DEBAUCHERY with Jose!