If our modern day hard-hitting reality has you thinking that the Golden Age of comic books was a simpler, more idyllic era; a time of innocence and a clear line between good and evil, you must consider the history of one of the epoch’s most enduring fictional characters and the most popular female superhero of all time: Wonder Woman. This 1942 literary creation was brought about by a historic collaboration between Maxwell Charles Gaines, a pioneer of the modern comic book industry as well as publisher of All-American Comics and internationally famous psychologist, Dr. William Mouton Marston, creator and developer of the polygraph machine.

In 1940 comics had a reputation for promoting violence, apathy and questionable sexual story lines. A piece by the Chicago Daily News at the time labeled comics as “a national disgrace.” The newspapers’ editor prescribed the banning of comics to parents and teachers, underlining: “unless we want a coming generation even more ferocious than the present one.” Max Gaines, who devised the first four-color, saddle-stitched newsprint pamphlet, knew the staying power of these publications and sought the counsel of long time comics advocate Marston, who held three degrees from Harvard, taught as a professor, was an inventor and wrote screenplays for Universal Pictures. A crucial moment marking the inception of DC Comics was when Gaines appointed Marston to a newly formed editorial advisory board that stamped his consolidated publications with a label of quality, “A DC Publication;” to eschew controversy pertaining to gratuitous violence. Marston’s input was that the best way to fend off the critics was to create a female superhero. Wonder Woman was born and debuted in All Star Comics #8 (December of 1941). 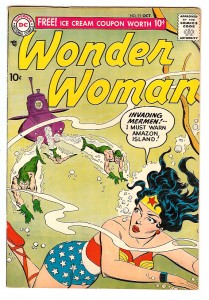 Inspiration came to Marston from the heroines of the women’s suffrage movement. This subject is well documented in Harvard historian and New Yorker staff writer Jill Lepore’s new book The Secret History of Wonder Woman (2014). The private papers of Dr. William Moulton Marston reveal a personality influenced by early suffragists and feminists, a predilection for non-conformists and iconoclasts. A renegade in his own way, Marston brought into his married life an affair with student Olive Byrne, who was the niece of Margaret Sanger; one of the most influential feminists of the twentieth century. Marston’s wife, Elizabeth Holloway, accepted the new lifestyle and was crucial in recommending that his new hero be a woman.

In a 1943 issue of The American Scholar, Marston wrote: “Not even girls want to be girls so long as our feminine archetype lacks force, strength, and power. Not wanting to be girls, they don’t want to be tender, submissive, peace-loving as good women are. Women’s strong qualities have become despised because of their weakness. The obvious remedy is to create a feminine character with all the strength of Superman plus all the allure of a good and beautiful woman.”

Wonder Woman, of ancient Greece Amazonian origin was designed wearing a kinky outfit with blue underpants, red leather boots, a golden tiara and was endowed with highly skilled martial arts, acrobatics and expert use of her bracelets for protection, plus a trusty golden lasso.

Yet, in March of 1942 the National Organization for Decent Literature blacklisted Sensation Comics as a “publication disapproved for youths,” explaining that “Wonder Woman is not sufficiently dressed.” A plot device adhered to by Marston harped on “Aphrodite’s Law,” where Wonder Woman’s strength would be removed if she allowed her bracelets to be bound or chained by a male. Story after story, the Amazonian heroine was bound, gagged, and tied up. This mostly occurred on Paradise Island, her mythical home, yet amounted to the most critiqued parts of the plot lines. Max Gaines believed in the character and brought in DC’s first female editor, Dorothy Roubicek, to attend to the growing controversy. Ultimately the story was slightly tweaked but Roubicek who reported to Gaines that “Dr. Marston is cleverly handling this ‘experiment,’…perhaps he is bringing to the public the real issue at stake in the world… and that is that the difference between the sexes is not a sex problem, but rather a problem of the relation of one sex to the other.” 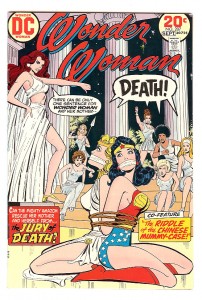 By contacting us we can point you in the direction Wonder Woman’s publication highlights: A powerful story that is seven decades strong and still bound to break barriers.