In 1938, Superman soared to the page and ushered in the Golden Age of comics. Nearly every comic book publisher scrambled to come up with a similar character, hoping to hit it big with another superhero. One publisher by the name of Fawcett Comics began to publish the adventures of a superhero called Captain Marvel, who they premiered in Whiz Comics #2 (February, 1940). They differentiated Captain Marvel from Superman by giving him the alter-ego of impoverished newsboy Billy Batson. Batson was granted magical abilities by a wizard named Shazam, each of the letters of whose name stood for a different fabled individual (Solomon, Hercules, Atlas, Zeus, Achilles, and Mercury). Shazam was able to bestow the powers and abilities of each of these legends upon whoever he chose, and Billy Batson was his lucky beneficiary. Whenever Batson said “Shazam”, he transformed in to the adult, super-powered hero known as Captain Marvel. For most of the 1940s, Captain Marvel was the most popular superhero, beating even Superman. 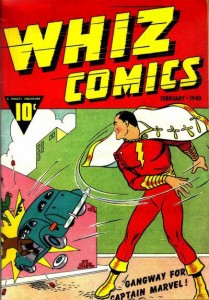 In Marvel Comics’ Captain Marvel, the Kree (a species of aliens) sent a military captain named Mar-Vell to spy on Earth. Humans, upon hearing his rank and name, incorrectly assumed that he was a superhero going by the name Captain Marvel. Although Mar-Vell had been sent to Earth in order to help the Kree defeat it, he eventually became a turncoat and sided with Earth, thus becoming the superhero he had initially been mistaken for.

DC Comics didn’t let their inability to use the Captain Marvel title foil their plans to publish all-new adventures of Captain Marvel. They instead used the title Shazam! on the covers of the comics, only referring to the character as Captain Marvel within the comic book pages. They continued this until 2011, when they also changed the name of the character himself to Shazam. 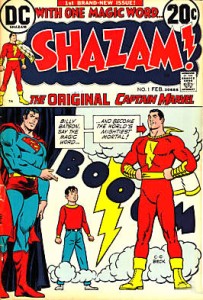 Meanwhile at Marvel Comics, Mar-Vell failed to become a very popular character and was consequently killed off after a number of futile attempts to make him more popular. However, in order to keep the Captain Marvel trademark from expiring, Marvel passed the Captain Marvel mantle on to several other characters, including Monica Rambeau, Genis-Vell, Phyla-Vell, Khn’nr, Noh-Varr, and last but not least, Carol Danvers (previously known as Ms. Marvel).