Hold on to your hats comic book aficionados because once again The Flash is gracing the small screen on the CW network. With the cultural success of comic books, it’s no wonder pop culture entertainment yet again taps into the vast well of content provided by the Silver Age and Golden Age of comic books to bring us a tale of super powers, justice, and the struggle between the forces of good and evil. We found the show to be geared for a youngish audience, but the effects are great – so much better than the previous Flash series.

A DC Universe superhero, The Flash debuted in Flash Comics #1 (January, 1940) and was created by writer Gardner Fox and artist Harry Lampert. In print, there have been numerous incarnations of the Flash, nicknamed the “Scarlet Speedster” and the “Crimson Comet;” all endowed with the power of super speed and superhuman reflexes. Jay Garrick (1940) was the first, but Barry Allen (created in 1956), is generally considered the first hero of the Silver Age of comic books. The Flash has contributed as a member in DC’s premier superhero teams such as: the Justice Society of America, the Justice League, and the Teen Titans.

A previous television version of The Flash was produced by CBS and aired in September, 1990. After only one season the show was cancelled due to a lack of audience and an inability to contend with stiffer primetime competition.

The CW’s new show stars Grant Gustin as Barry Allen, a young and brilliant forensic scientist working for the Central City Police Department. When Allen is struck by lighting during the explosion of a particle generator he becomes a metahuman while in a nine month coma. Upon completing his rehabilitation he discovers his super human speed and reflexes and vows to use his powers to protect Central City from malevolent metahumans that have risen to power.

The current Flash with Gustin is a spin-off from an appearance in the show Arrow, another production by the same team at the CW network. This show, which premiered in October, 2012, brings to life another popular DC character of the Golden Age, the Green Arrow; who first appeared in More Fun Comics, #73, November, 1941. Barry Allen made his first appearance in the second season of Arrow as a CSI from Central City. He arrives in Starling City and meets Oliver Queen (the Green Arrow) to investigate a burglary of Queen Consolidated, suspected to have been perpetrated by a criminal with super powers. 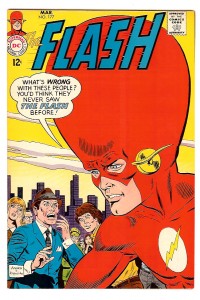 How did Flash get his Giant Head?

For more Silver and Golden Age adaptations lookout for a Fox Network production Gotham. This show spotlights a young Bruce Wayne after the death of his parents and expands upon the Batman mythology. And now with CBS announcing that they are picking up a “Supergirl” TV series, every major network has turned to comic books for material.

At Superworld Comics we have the original stories that have inspired all this television content. Contact us to find out where to acquire the insight and backstory on all these fantastic characters.