Most comic book fans are readily aware of at least one version of DC Comics popular female Kryptonian and most would agree that the ultimate incarnation is Kara Zor-El herself. A character popular among fans for decades now will finally be getting yet another crack at a live action adaptation on CBS this Fall.

Some fans are familiar with the (decidedly terrible) Supergirl movie of the mid 80’s as well as a less than memorable performance by Laura Vandervoort as the television version of Supergirl on the popular series Smallville. Now Supergirl may finally be getting the live action treatment she’s always deserved at the hands of none other than Greg Berlanti, the man mainly responsible for the shows Arrow and The Flash. Before we greet the brand new Supergirl, Melissa Benoist, whenever her new show appears, lets first take a brief look back at the history of Superman’s most famous cousin.

First introduced at the beginning of the Silver Age of Comic Books in May 1959, Kara Zor-El made her first appearance in Action Comics #252. Since that time the character has been replaced, written out, and even killed off for a long period when she was written out of existence during the popular Crisis on Infinite Earths storyline and was left out of main DC continuity all the way up until her reappearance in 2004’s Batman/Superman series. 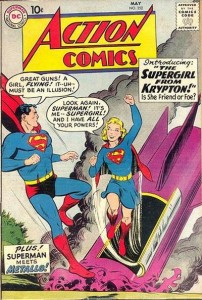 Kara Zor-El is the biological cousin of Clark Kent/Kal El and one of the only other surviving members of their Kyrptonian bloodline. She is also one of the only attachments that Kal El has remaining to the history and lives of his people and family. These aspects make her indispensable to the Man of Steel who has acted out in rage several times on her behalf fearing either danger towards her life or (in the case of Batman) feeling that others do not trust her in the same way they trust him. Regardless of how Batman feels about her, Supergirl has become one of the most endearing and popular characters to emerge from DC lore, consistently popping up on most popular lists as well as influential female character lists.

As we look forward to the Fall of the 2015 TV schedule we can only hope that the new Supergirl show from CBS holds itself to the same high standards that, so far, have kept Arrow and The Flash at the top of their ratings pool. With the recent announcements about the casting additions of Dean Cain (Lois and Clark: The New Adventures of Superman) and Helen Slater (1984’s Supergirl film) as well as the character mentions of Cyborg Superman, Jimmy Olsen, and even a confirmed appearance from the Big Blue Boy Scout himself, it seems a given at this stage that if the show doesn’t thrill it should certainly entertain.

If you have a developing or longtime interest in classic comics from the Golden Age, the Silver Age, or just an interest in comics feel free to contact us and make some friends with similar interests today!