The Silver Age of comic books was a special time of relative innocence, an innocence which often gets rattled by the more brutally realistic concepts of modern comics. One of the toughest of these was the graphic novel “The Death of Superman,” a series which shook the convictions of many Silver Age comic book fans to their very core. 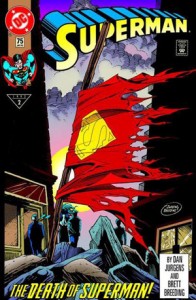 In a 1992 series known as “Doomsday!” an unstoppable and brutal monster appears and starts rampaging Earth. He plows through the military, easily handles the world’s superheroes, and even fatally wounds Superman. Thankfully, the Man of Steel lands the final blow to take him out.

The series had a minor impact on the comic book world, but when collected, it hit wider culture like a punch from Doomsday. Thousands of fans were driven to tears, figuring Superman was dead for good and simply couldn’t handle a world without him.

In fact, just remembering the impact the story had on culture in general really illustrates the power Superman had on the world back then. Even people who hated comics bought it, read it, and felt a pang of regret. The word spread quickly as television programs covered the event and comic book fans across the world mourned.

The amusing thing is that DC has claimed that they had planned to bring Superman back all along and that the story of his death was just a way to delve into how the world filled his void. Naturally, a variety of pretenders tried to take his throne, including:

Naturally, Superman is later resurrected and deals with these four, but the world was never quite the same: it was hard to be a Silver Age fan and watch the Man of Steel get pummeled so brutally. In some ways, it’s like he never really came back at all: his popularity has never really recovered, as Batman and other “grittier” characters rule the day.

If you still have powerful memories about the day they tried to take Superman away, contact us and share them.