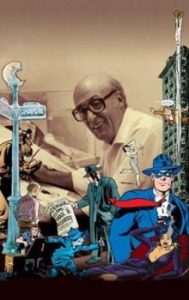 Willam Erwin Eisner was born on March 6, 1917 in Brooklyn, New York. From an early age Will had an affinity to art, and his father, Samuel, encouraged him by buying him art supplies and give him advice, much to his mother’s chagrin who preferred he pursue what she considered a steadier more lucrative career in business.

While Eisner loved creating art, he recognized the importance of understanding business and from the age of 13 found a job selling newspapers to help support his struggling family finding the job a competitive one as boys fought for the best street corner locations.   Eisner attended DeWitt Clinton High School along with fellow cartoonist Bob Kane (Co-creator of Batman), where he illustrated much of the school newspaper.  While in a theater class he learned the art of stage design and after graduation he studied for a year at the Art Students League of New York where he made contacts which landed him a position as a writer-cartoonist for New York American newspaper, while freelancing pulp illustrations for various publishers.

High school chum Bob Kane suggested Eisner submit work to the new comic book publishers as Kane had begun having some successes there. WOW COMICS editor Jerry Iger bought Eisner’s adventure strip CAPTAIN SCOTT DALTON and his comic career was off and running.  After WOW COMICS ended with its fourth issue Eisner teamed with Iger to create a studio which would provide completed comic stories for various publishers including Fox Comics, Fiction House, Quality Comics and others.   Making more than $1.50 profit on every page they sold Eisner would later express that at 22 he was considered wealthy and that in 1939 he and Iger split $30,000 in profits which was a great deal of money at the time.

In 1939 Quality Comics publisher Everett “Busy” Arnold came to Eisner and told him that Sunday newspapers were looking for a way to capitalize on the comic book business and he developed the concept of an insert section which would feature 7-8 page stories featuring a variety of different characters that would be inserted into newspapers, particularly the Sunday papers, each week, and it was in this format that Eisner created THE SPIRIT, a feature which would be considered his landmark work. 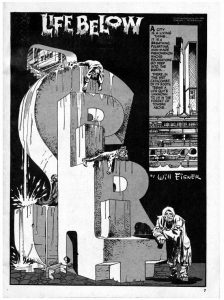 Eisner was excited with the prospect of a mostly adult audience where he felt he could do the stories he longed to do, Eisner wanted to get as far away from superheroes as he could. When publisher Arnold listened to his concept of The Spirit his first question was if he had a costume, so Eisner added the mask and the gloves to give his character a more heroic feel.

Eventually the 16 page supplement was distributed to more than 20 newspapers with a combined circulation of over five million copies debuting on June 2, 1940 and running through 1952.  In early 1942 Eisner was drafted and he turned THE SPIRIT over to ghosts who did an admirable job but lacked Eisner’s storytelling skills. THE SPIRIT’s best work appeared when Eisner returned after WWII.

After THE SPIRIT ended in 1952 Eisner made the jump into advertising and informational comics while prepping his idea for a “Graphic Novel” — a totally adult oriented form of comic book which would be as far removed from the comic book heroes as could be.  Meanwhile independent and underground comics publishers began appearing and Eisner took note, many of them had been fans of his earlier work and reprinted many of his SPIRIT stories.   In the 1970s Eisner turned his attention to his first graphic novel attempt– A CONTRACT WITH GOD.  It was at this time that Stan Lee took him to lunch and tried to sell him on taking over for him at Marvel Comics as Lee was leaving his Editorial position and moving into a Publisher position which would find him spending most of his working time developing Marvel properties in Hollywood.

While the offer was lucrative, Eisner still remained uninterested in superhero comics and decided to spend his free time teaching at the School of Visual Arts in New York.  Eisner used the classes to reinforce his own storytelling techniques as he continued to create and publish his series of graphic novels right up until his death on January 3, 2005 in Lauderdale Lakes, Florida, after complications of a quadruple bypass surgery he had several weeks earlier.

Eisner’s legacy goes on, in the form of his prestigious Eisner Award, the Academy Awards of sorts, in the comics industry, which are handed out at San Diego Comic Con every year. His vast library of work remains in print including his entire run of THE SPIRIT in the hardcover DC Comics Archives series.