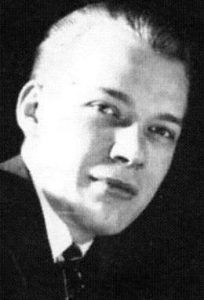 Richard W. Sprang was born July 28, 1915 in Fremont, OH. From his teen years Sprang worked as an illustrator in pulps for publishers like Columbia and Street & Smith before joining a daily newspaper in 1934 in Toledo, Ohio, where he mastered the art of meeting difficult deadlines. In 1936 he moved to New York City to be closer to the pulp publishers and even dabbled in writing for some of them as well as for the LONE RANGER Radio Show-  but he began to see the writing on the wall that pulp sales were beginning to decline so he made the jump into the new field of Comic Books, even starting his own studio with fellow artists Norman Fallon and Ed Kressey, creating a “packaging house” which would produce comic stories for comic book publishers.

Some of the characters they packaged included Power Nelson from PRIZE COMICS #1, Shock Gibson and Sky Wizard for MIRACLE COMICS #1. Continuing to seek work he submitted samples to DC Comics editor Whitney Ellsworth who assigned him a Batman story starting in 1941. Ellsworth was certain Batman creator Bob Kane would be drafted so his original plan was commission work from Sprang that he could put into inventory to prevent any delays that would be caused by such an event. 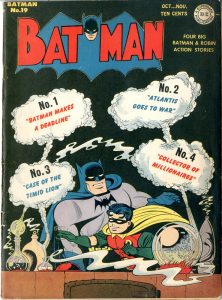 Sprang’s first full work on Batman was the cover to #19 (Aug-Sept 1943) as well as the first three stories on the interior, while he handled the penciling on the fourth story which was inked by his studio mate Norm Fallon. As with all Batman artists at the time, they were treated as ghosts working under Bob Kane’s byline. In May of 1944 he married fellow commercial artist Lora Ann Neuslis and they moved west to Sedona, Arizona in 1946. During this time Sprang enlisted Lora in some of the Batman lettering and coloring and she eventually did work for DC Comics under the name of Pat Gordon.

While in Arizona Sprang become something of an explorer where he made many discoveries including a previously unrecorded ancestral Puebloan structure. His love of the Western frontier created endless pages of thesis papers and correspondence much of which is collected and displayed at local universities. 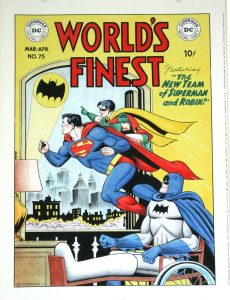 In 1951 Sprang and his wife divorced and she returned to New York City, while he because one of the primary Batman artists over the next 20 years, even to the point of becoming Bob Kane’s “favorite” ghost– the Batman creator admired Sprang’s ability to create outlandish and exciting layouts and character designs many of which emulated the work of DICK TRACY’s Chester Gould. In 1955 Sprang got the chance to draw Superman when he replaced Curt Swan on World’s Finest Comics, which is where he worked until his retirement in 1963. 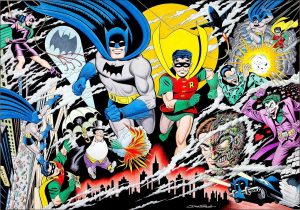 Sprang lived long enough to see a resurgence of interest in his work, re-creating many of his original covers at paintings for fans and even coming back to DC Comics in 1987 for occasional assignments and completing the covers for Detective Comics #6220624 in 1990. In 1995 and 1996 he produced two limited edition lithographs for the Warner Bros Studio stores featuring Batman and his most popular elements. In 1999 he was inducted into the Will Eisner Comic Book Hall of Fame.

Dick Sprang passed away on May 10, 2000 but not before leaving an incredible legacy behind him, one of the true legends of the industry.

Among many of Sprang’s accomplishments is the original design of The Riddler, and meeting sometimes insane deadlines due to the extreme tardiness of Batman writer and co-creator Bill Finger.