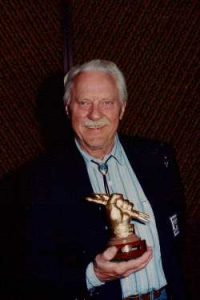 Ask most people who read comics in the Silver and early Bronze age of comics to picture the comic book Superman in their head, the vast majority will come up with Curt Swan’s iconic looking Man of Steel.

Douglas Curtis Swan was born February 17th, 1920 in Minneapolis, the youngest of five children of his parents John Swan and Leontine Hanson. Disliking how the nickname for his first name sounded too much like “Dog” he reversed the order of his came becoming Curtis Douglas Swan.

Swan served in the Army during WWII where he worked mostly as an artist for the GI Magazine STARS AND STRIPES, which is where he met writer Francis Herron. Herron had worked previously for Timely Comics where he co-created The Red Skull and Captain Marvel Jr at Fawcett Comics.   Herron was also involved in the creation of Cave Carson, Pinky the Whiz Kid and Mr. Scarlet.  After WWII Herron found work writing and editing at DC Comics and he brought Curt Swan along with him.

Returning to civilian life, Swan and his new bride Helene Brickley, whom he had met while enlisted, moved from Minnesota to New Jersey where he took freelance assignments from DC Comics while going to the Pratt Institute of Art under the GI Bill.   After several months of night classes, his instructors encouraged Swan to leave the classes behind and pursue his success in comics.  Swan worked for a run on BOY COMMANDOS but found he preferred leaving the inking of his work to other artists so he began to exclusively work as a penciler.   Assignments included TOMMY TOMORROW and GANGBUSTERS but soon he was assigned to SUPERMAN with issue #51 (March 1948). From there he moved over to SUPERBOY beginning with #5 in 1949 before returning to SUPERMAN with #76 which featured the very first team up of Superman and Batman (May-June 1952). 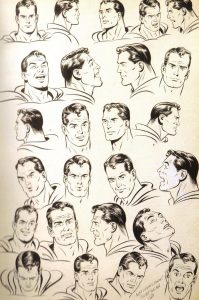 Swan found Superman Editor Mort Weisinger’s controlling style very stressful and he began suffering from serious migraines which caused him to leave comics and begin working in advertising full time in 1951. When DC’s two most iconic characters began teaming up on a regular basis in WORLD’S FINEST #71 (Jul-Aug 1954) Weisinger reached out to Swan to get him to return to comics but Swan stood his ground and explained how he hadn’t enjoyed working with him, the editor admired Swan’s courage in his honesty and found a new respect for the artist which vastly improved their working relationship.  Swan came back on the DC bandwagon and took on the World’s Finest assignment.   Swan’s big break came when he was given the full time art duties on SUPERMAN’S PAL, JIMMY OLSEN in 1954. On June 18, 1956 Swan was assigned the penciling duties to the SUPERMAN daily newspaper comic strip which he continued until Nov 12, 1960. 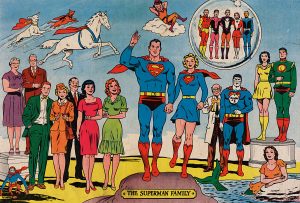 By 1960 DC Comics was looking to softly revamp Superman from the version done for so many years by Wayne Boring, Swan was assigned the main title and gave the Man of Steel a sleek “new look” which was just what DC was looking for. The 60s became a fertile time for Swan’s comic career co-creating the Composite Superman in WF #142 (Jun 1964) and coming up with the never asked for but often demanded Superman Vs the Flash race with writer Jim Shooter in SUPERMAN #199 (Aug 1967). Swan’s work was on a consistent level despite his workload which sometimes included TWO monthly comic books per month. Swan remained on Superman through the new editorship of Julie Schwartz and crafted another soft reboot in #233 (Jan 1971) by writer Denny O’Neil which sought to re-define Superman’s powers and in the story “KRYPTONITE NEVER MORE!”. 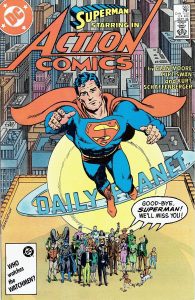 Swan continued his streak on Superman until he was dismissed with no acclaim in 1986 with the revision of Superman by artist and writer John Byrne. Many felt that DC Comics was shameful in their treatment of Swan whose run ended with SUPERMAN #423 (Sept 1986) in the acclaimed “WHATEVER HAPPENED TO THE MAN OF TOMORROW” story by Alan Moore.

Swan dabbled in work for DC Comics after his loss of a regular gig, but his final work on Superman was for the 1996 THE WEDDING SPECIAL. Swan died on June 17, 1996 in Wilton, Connecticut.

Superworld Comics has been in business for thirty years, buying and selling vintage comic books! If you’ve got a collection you are ready to part with give us a call at the number listed at the top of the website, and be sure to tune in to Instagram for Superworld Live Shows; Teddy’s Treasure Chest Tuesdays is on at 6pm and Lunch With Jose is on Thursdays at 1pm. Each show features great comic books at bargain prices and check out our website for thousands more books available!