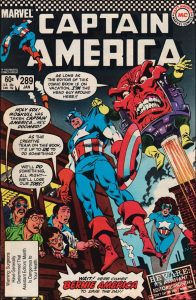 Comic Book Covers sell books!  There can be no question about that– a good cover will make you take out your wallet without giving it much thought, a crazy cover might make you scratch your head but you have to admit, they certainly make you want to know what’s going on inside!   This first example, CAPTAIN AMERICA #289 (Oct 1983) might be a cheat because it’s supposed to be wacky– it’s assistant editor month at Marvel, but this cover by Mike Zeck featuring a combined MODOK and Red Skull makes me want to track this one down! 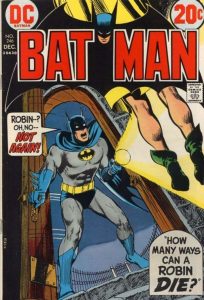 The second cover on our list might be called crazy, but I’d call it CRAZY GOOD!  Being not a fan of Robin the Boy Wonder after one too many of Burt Ward’s Holy this and Holy that I was glad to grab this comic off the stands in early 1973– BATMAN #246 (Dec 1972) by Neal Adams features the death of Robin and advertises HOW MANY WAYS CAN A ROBIN DIE! Well I could think of a lot of them! 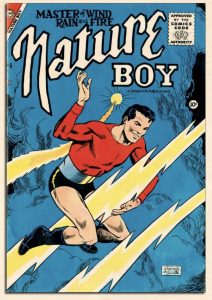 Nature Boy is a prime example of having good creators on a project doesn’t mean it’ll be good.  The product of Superman co-creator Jerry Siegel and soon to be comics legend John Buscema Nature Boy was a complete miss from Charlton Comics.   The character first appeared in Nature Boy Comics #3 and lasted all the way until this issue #5 before he was banished to the world of public domain forgotten superheroes where he should probably stay. 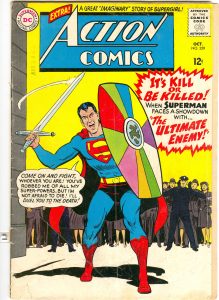 There’s a good amount of Superman related titles on this list, and that’s the fault of the creators who were finding it hard to make an all powerful character interesting– well this cover from ACTION COMICS #329 (Oct 1965) gives us a lot to chew on, from the rage on Superman’s face to the rainbow shield he fends us off with there are just so many questions that need answers! 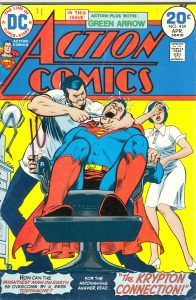 Another ACTION COMICS cover– this one #434 (Apr 1974) begs the question of what Superman does when he gets a toothache.    That’s a question I never thought of, and I’m not sure why the nurse is fainting since she works in a dentists office, but Krypton is somehow connected at least according to the cover blurb, 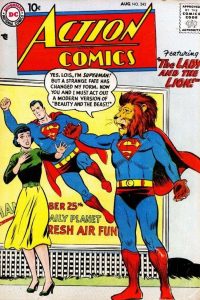 ACTION COMICS #243 (Aug 1958) gives us a half man half beast Superman which we’ve seen before I’m sure, but his attempted pickup line to Lois Lane that he’s forced to reenact Beauty and the Beast would at least had me pick the book up off the rack to flip through to find the answer before being told “This isn’t a library!” by the front desk clerk at West Side Pharmacy. 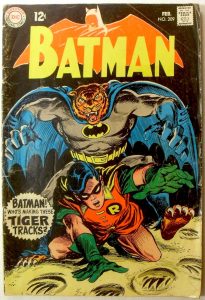 We’ve picked on Superman enough, let’s laugh at Batman from #209 (Feb 1969), now let’s keep in mind that over at Marvel Comics Jim Steranko was offering us a battle between Captain America and The Hulk in the pages of CAPTAIN AMERICA #110 with a drop dead gorgeous cover– and this is what DC is offering.   Another flip through to find out why Batman has a tiger head but probably not plunking down my hard earned 12c because I need to buy an extra copy of CAPTAIN AMERICA this month. 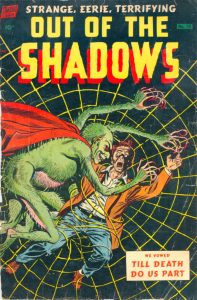 We have a look at pre-code horror coming up here on the blog, but here’s a snippet of some of what made those books so great– OUT OF THE SHADOWS #10 (Oct 1953) features a terrifying looking CAPED spider crawling on top of our helpless victim in a giant web!  The stuff of nightmares! 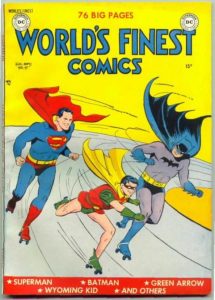 It’s often asked why WORLD’S FINEST COMICS doesn’t have the value of either SUPERMAN or BATMAN COMICS from the same time period– well this cover is a nice example of maybe why– WORLD’S FINEST COMICS #47 (Aug 1950) featuring Superman, Batman and Robin roller skating might not get the average reader’s pulse pounding back in 1950 and it certainly explains collectors lack of interest in some of these today. 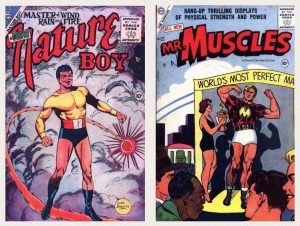 We close out our look at Crazy covers with a double feature showing us NATURE BOY #4 which isn’t much better than #5 listed above as well as MR. MUSCLES #22 which was another attempt by Jerry Siegel at Charlton Comics, this time with a cover by Dick Giordano.  Mr Muscles made his debut in in #22 (Mar 1956) and lasted all the way until issue #23 when his feature was cancelled.

That wraps up our look at Crazy Comics!  We’ll be back for more sometime.

Superworld Comics has been in business for thirty years, buying and selling vintage comic books!  If you’ve got a collection you are ready to part with give us a call at the number listed at the top of the website, and be sure to tune in to Instagram for Superworld Live Shows;  Teddy’s Treasure Chest Tuesdays is on at 6pm and Lunch With Jose is on Thursdays at 1pm.  Each show features great comic books at bargain prices and check out our website for thousands more books available!