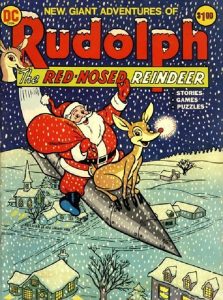 In 1972 DC Comics published RUDOLPH THE RED NOSED REINDEER as a giant oversized comic book measuring roughly 11x 14 which would come to be known as a “Treasury Size” or Tabloid. This large book stood out at newsstands and sported a $1 cover price which was about 3x the price of a normal comic book.

Treasuries were first put out because the cost of producing a larger book of solely reprinted material (in Rudolph’s case comics from the 1940s) was about the same as producing a standard comic book but offered 3x the profit at the higher price point.

In this time of the early Bronze Age Era of comics, Marvel Comics was still a vast junior to DC Comics in terms of cash capital, although their books sold extremely well they didn’t benefit from the large parent company DC Comics had giving them deeper pockets and therefore able to experiment with a concept and absorb the risk. 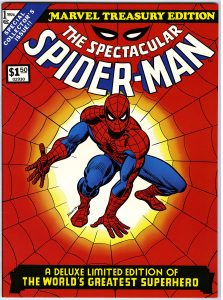 Marvel took note of the success of the Treasury and introduced their first offering into the genre with THE SPECTACULAR SPIDER-MAN in 1974.   The book reprinted stories from Amazing Spider-Man #14, Strange Tales Annual  #2, ASM #42, Marvel Superheroes #14, ASM #90 and ran 94 pages. The book was a success for Marvel and Spider-Man would go on to have several more editions.

Marvel jumped in full on and produced between 2 and 5 Treasuries every year from 1974 – 1980 featuring their stable of characters. Conan and The Hulk (who had a popular TV series at the time) would rival Spider-Man’s treasury success, and The Fantastic Four, Thor, The Avengers, The Defenders and Howard the Duck would all get their own shot at the oversize market.

In addition to the solo titles Marvel Produced several Team Up titles including their Holiday Editions which would feature Christmas themed stories from their archives.

The Distinguished Competition kept up the pace with their own titles starting with a giant Summer 1973 issue of SHAZAM which reprinted Captain Marvel’s Golden Age Stories and soon in 1974 a BATMAN TREASURY featuring a great Neal Adams cover which reprinted stories from Batman’s Golden Age right up to the present day. DC often included new material in the form of character model sheets, puzzles and dioramas which could be cut out and assembled from the back cover of the book. 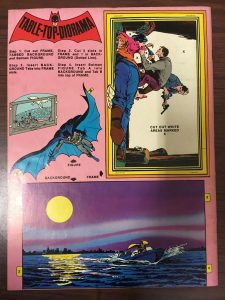 Caption: Detail showing back cover diorama which destroyed many of these books when kids put them together.

In 1975 Marvel and DC did the unthinkable and teamed up to produce THE WIZARD OF OZ in what would be the first intracompany collaboration between comics big two companies which lead to the monumental landmark SUPERMAN VS THE AMAZING SPIDER-MAN in 1976 which pitted the two flagship characters of each company against each other in a story plotted by Gerry Conway (the man who killed Gwen Stacy a few years earlier) and drawn by Russ Andru and Dick Giordano.

This type of super sized story was perfect for the oversized format and lead to a sequel a few years later but not before Superman would take on the World Heavyweight Champion in 1978 with SUPERMAN VS MUHAMMAD ALI featuring a story by Denny O’Neil and art by Neal Adams.

From the beginning DC embraced the Treasury Editions even more than Marvel did putting out FAMOUS FIRST EDITIONS which reprinted some of the origin issues of their top characters in the larger format. It’s worth noting that there were cases of the outer cover being removed and the Treasury comics being passed off to unsuspecting collectors as the genuine article because in those days before the internet most fans knew Golden Age Comics were larger but few had seen them in person.   The treasuries did remarkably well because they stood out so much on the newsstands and having a higher cover price meant better profit for the seller. 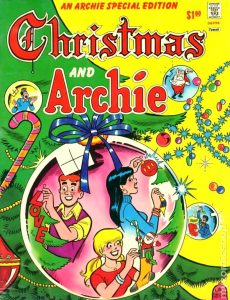 Archie’s entry into the treasury format is among the most rare of titles.

Archie Comics got into the mix with CHRISTMAS WITH ARCHIE while Marvel and DC continued their output featuring a wide variety of licensed properties including STAR WARS, BUCK ROGERS, BATTLESTAR GALACTICA, WELCOME BACK KOTTER, TARZAN, YOGI BEAR, THE FLINTSTONES and many more.   The genre wound down when DC teamed with Marvel again to pit two of it’s second most popular characters in BATMAN VS THE INCREDIBLE HULK by Len Wein and Jose Garcia Lopez released in 1981.

Treasuries have attempted comebacks over the years as publishers and collectors embrace the larger size but nothing has taken hold like these Bronze Age Beauties!

PUBLISHED WITH NO NUMBERS

SUPERMAN VS THE AMAZING SPIDER-MAN 1976

CLOSE ENCOUNTERS OF THE THIRD KIND 1978

THE EMPIRE STRIKES BACK 1980

Check our website for thousands of great comics for sale and remember to tune in to Instagram Live Tuesdays at 6PM EST for TREASURE CHEST TUESDAYS with TED and on Thursday at 1PM for LUNCH AND DEBAUCHERY with Jose!