In the art world, when you hear the word ‘Americana’ you think of Grandma Moses and Norman Rockwell. In the world of comic books Americana is defined by Archie Andrews and Riverdale. This quintessential story from the Golden Age of comic books has been spinning fanciful, charming stories and characters for nearly three-quarters of a century. One would think that a troop of high school students would run out of ‘literary gas’ after such a long run, but Archie and the gang are finding new ways to get our attention and reinvent this historic book.

MLJ Magazines, out of New York, began publishing comics in 1939. They were responsible for such characters as the ‘Shield,’ the first patriotic comic book hero, preceding Marvel’s Captain America by 14 months; debuting in Pep Comics (1940). MLJ founder John L. Goldwater wanted to tap into the popularity of Metro-Goldwin-Mayer’s Andy Hardy films, which depicted an idealized, sentimental, ordinary American life; so he created Archie Andrews in collaboration with artist Bob Montana and writer Vic Bloom. The Riverdale gang, which also included essential fictional teenage archetypes such as the girl-next-door Betty Cooper, rich socialite Veronica Lodge, Archie’s rival nemesis Reggie Mantle, and lovable slacker best-friend Jughead Jones, debuted in Pep Comics #22 on December 22, 1941. Archie and friends got their own imprint in the Winter 1942, Archie Comics, and still remain the company’s longest-running publication. 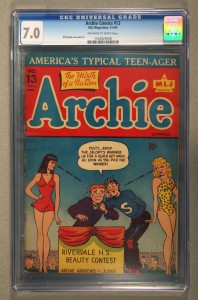 In retrospect the biggest splash that occurred in decades was the ‘Archie Story of the Century’ that finally unfolded in 2009, when Archie picked Veronica over Betty for his hand in marriage. Eventually this future fantasy in the Archie-verse revealed that Archie truly chose Betty, to the delight of Archie loyalists. Yet, it seems that the publishers at Archie Comics were just getting warmed up. In 2010 Archie’s first openly gay character, Kevin Keller was introduced and immediate received acclaim from the LGBT community, even winning a GLAAD media award in 2011. Subsequently the release of critically acclaimed titles such as Afterlife with Archie (2013), a terrifying captivating story of the zombie apocalypse erupting in Riverdale, and the Chilling Adventures of Sabrina (2014), a retelling of the teenage witch’s origins, have reinvented the quiet label in recent years into a prominent publisher of horror comics and garnered praise from fans and the industry alike.

The writer behind these successful books and now Chief Executive Officer at Archie Comics, Robert Aguirre-Sacasa is a major force behind the stewardship of the Archie brand. His first move after taking on this mantle is hiring HBO’s Girls creator Lena Dunham to write a four-issue miniseries for the company, starting next year. Another puzzling yet tantalizing crossover book was announced at this years’ New York Comic Con, Archie Meets Predator! Archie and friends will meet Dark Horse Comic’s most dangerous galactic hunter in the jungles of Costa Rica while on spring break. The first issue of this insanely entertaining concept written by Alex di Campi, will be released on April 2015.

Archie’s growing cache will be tested with the production of a television series for Fox entitled Riverdale. Slated for next year it will be produced by Greg Berlanti’s Berlanti Productions (Arrow, The Flash, Dawson’s Creek), and written by Roberto Aguirre-Sacasa (television writing credentials include Glee). These veterans of comic book productions and adolescent dramas will explore the darker side of the idyllic All-American high school and the very complex teenage pageantry through the Riverdale ensemble.

November 9, 2014 through November 23, Superworld Comics is auctioning some rare 1940’s Archies from an original owner collection.

Check out our Ebay auctions to see these amazing books –some are the highest graded CGC!

Contact us to discover a selection of formative stories from the annals of Archie Andrews and the Riverdale gang. 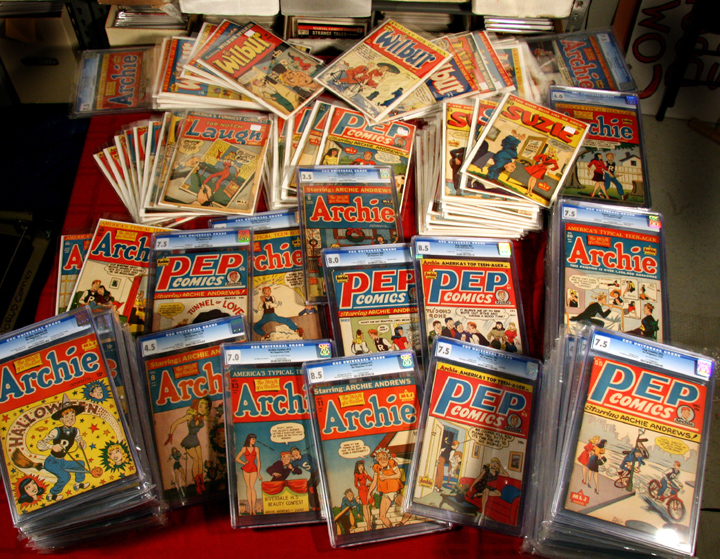