The Silver Age of comic books reinvigorated the superhero genre for publishers of alter-ego vigilantes and superhumans. A creation from this period that is making serious waves is Marvel’s The Avengers. Still in vogue, and perhaps stronger than ever, the 2012 film The Avengers by Joss Whedon, showcasing Marvel Universe’s preeminent superhero group, is the highest grossing comic book movie of all-time and the 3rd biggest movie ever (yes, EVER: third behind Avatar and Titanic). Raking in worldwide box office ticket sales of $1.5 billion dollars, it is no wonder that Disney (Marvel’s parent company) has followed up vigorously with Avengers: Age of Ultron, which has a release date of May, 2015 (View the recently leaked trailer here).

The Avengers, originally comprising Iron Man, Ant-Man, the Wasp, Thor, and the Hulk, debuted under its own book for Marvel in The Avengers #1, published September 1963. In response to the success of DC’s Justice League of America, comic book dynamic duo Stan Lee and Jack Kirby rallied the forces of “Earth’s Mightiest Heroes” to fight “the foes no single superhero can withstand.” In the inaugural issue this mighty roster battles the sinister Loki, the God of Evil. If you own this issue, we highly recommend that you take good care of it. This Avengers #1, CGC 2.5 signed by Stan Lee is worth $1400! 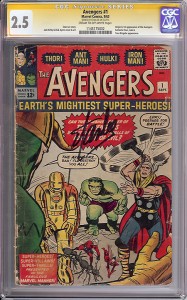 Stan Lee and Jack Kirby had previously attempted to steal some of the thunder from DC’s Justice League with Marvel’s first superhero group; the Fantastic Four. A highly successful book which combined atypical superhero archetypes and a new found realism in the genre, was first released as The Fantastic Four #1 in November, 1961.

Therefore DC Comics created the supergroup, but before the successful outfit, Justice League of America, there was the initial Justice Society of America, a.k.a JSA. DC Comics effectively reintroduced a number of Golden Age superhero characters during the late 1950s thanks to the vision of editor Julius Schwartz, who asked writer Gardner Fox to revive the first and foremost superhero group: Justice Society of America. This was Fox’s own creation, in collaboration with editor Sheldon Mayer. It first debuted in All Star Comics #3 during the Winter of 1940. JSA, initially assembled Doctor Fate, Hour-Man, the Spectre, the Sandman, the Atom, the Flash, Green Lantern, and Hawkman. Since the Atom, the Flash, Green Lantern, and Hawkman were characters published by All-American Publications, All-Star Comics #3 has the distinction of not only being the first team-up title but also the first inter-company superhero comic book ever. The team was popular throughout the 1940s, but with the receding cultural popularity of superheroes after the WWII era, the JSA’s adventures ceased with issue #57 of All-Star Comics (Feb-Mar 1951).

JSA members remained absent from comics until ten years later, when editor Julius Schwartz at DC Comics reinvented several Justice Society members and assembled this redux of the supergroup now featuring Superman, Batman, Wonder Woman, Flash, Green Lantern, Aquaman, and the Martian Manhunter, under the new monicker the Justice League of America. The super troop was unleashed upon DC villains everywhere in The Brave and the Bold #28 (February/March 1960). Two further appearances later in that title and JLA got it’s own series which quickly ascended to become one of DC’s best-selling titles.

To capture the energy and vitality of these super groups contact us and find the titles that detail the extensive and wondrous stories of these magnificent unions.