Okay, so most of us have spent at least a few minutes watching pet videos on YouTube or marveling at our own pets’ latest shenanigans. Sure, they are all entertaining but we bet none of them can compare to the Legion of Super-Pets. They were some of the most amazing animals to appear in ink during the Silver Age comic book era.

They made their first group appearance in February 1962. It was part of DC Comics’ Adventure Comics #293: The Legion of Super-Traitors issue. Not only did it feature the Super-Pets, we got to meet the Brain-Globes of Rambat and Bizarro Luthor for the first time too. But we digress; let’s get back to the Super-Pets. 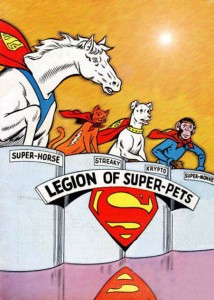 The first ones to make the scene were Krypto, Comet, Beppo and Streaky. In later issues, they were joined by Whizzy, Proty, Ace, Jumpa, Ch’p and Topo. Krypto, Beppo and Streaky had all been featured in earlier issues as individuals. Comet, however, had not. The February 1962 issue was the first time that any Silver Age comic book fan laid eyes on him but it certainly wouldn’t be the last time that he showed up to help save the world.

Of course each of the Super-Pets had their own special powers. Take Krypto as a prime example. When he barked, he could freeze people dead in their tracks. He also possessed just about every super sense DC Comics’ story writers could come up with. Talk about being worthy of a doggy treat! As for Beppo, Streaky and Comet, well they were pretty special too.