Wait, This Was a Thing?

Yes it was and, unfortunately, it lasted only one season. It starred John Wesley Shipp as the Flash, and featured a wide range of bigger name stars as supporting cast, such as M. Emmet Walsh and Richard Belzer. 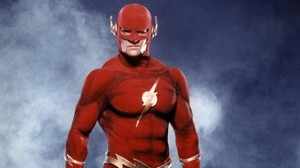 John Wesley Shipp as the Flash

Oh, it was definitely fun alright! It was filled with the kind of surreal and fun moments that pushed the Silver Age into the stratosphere. One of the most amusing episodes was “Fast Forward,” which sees the Flash accidentally propel himself 10 years into a future where the mere mention of his name is illegal.

Two episodes later, he finally gets the chance to face arch villain “Captain Cold,” ironically enough, on the hottest day of the year. Little touches like that, alongside solid costume design from special effects guru Stan Winston, made the show work.

What Caused the Cancellation?

Sadly, the “Flash” just didn’t capture the imagination of the public the way that superhero television shows do today. One major problem was that the show was about an hour-long, a span that taxed the attention span of younger comic book fans.

It was also in a truly demanding time slot and often lined up against such heavy hitters as “The Simpsons,” a battle a new (and occasionally gloriously silly) show simply wasn’t going to win.

Another problem was the high cost of producing episodes, which included new costumes, special effects, and big name appearances (such as Mark Hamill as the “Trickster”) every week.

What is the Show’s Legacy?

A comic tie-in “The Flash TV Special #1” was produced during the show’s run, as were tie in games for the “Game Boy” and the European “Master System.” Strangely enough, “La-La Land Records” released a two-disc soundtrack of the show, including Danny Elfman’s memorably heroic theme.

And in the 2014 version, the original show is constantly referenced, including bringing back Hammill as the Trickster and John Wesley Shipp as Barry Allen’s Dad.