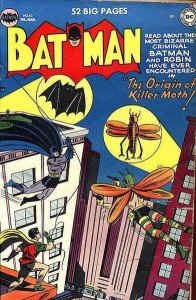 “The man who would become known as Killer Moth was originally inmate #234026 in Gotham State Prison. Deciding that the criminals of Gotham needed a guardian just as the honest citizens had Batman, he became determined to fill that need.

Upon his release from prison, the inmate used his ill gotten fortune (accumulated before he went to jail) to create the identity of Cameron Van Cleer, a wealthy socialite.

Beneath his mansion, Van Cleer excavated an elaborate cave equipped with a modern crime lab in which he hoped to develop the most scientific methods of making a crime impossible to solve. After completing a complex arsenal, then donning a dark and mysterious costume, Van Cleer offered his protection services to the underworld as the Killer Moth.”