It’s hard to believe that Marvel’s Matt Murdock, the young boy who was blinded by a radioactive substance which endowed him with superpowers has now turned 50! This Silver Age comic book hero first appeared in print on April, 1964 in Daredevil#1. He was created by famous comic book guru, writer/editor Stan Lee and artist Bill Everett with contributions from legend Jack Kirby. A blind lawyer by day and justice crusader by night, Murdock donned his secret identity to avenge his father’s death and patrol the streets of New York with his heightened senses. A long list of memorable and enduring characters have germinated from the pages of Daredevil’s tales such as Elecktra, a former love interest and partner in crime fighting; and formidable villains such as The Owl and Bullseye. 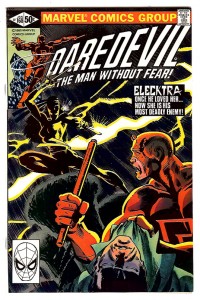 The popular hero of Hell’s Kitchen has been depicted in film, video games, and animated series in the past, most recently in a major motion picture by 20th Century Fox, Daredevil (2003); starring Ben Affleck as the acrobatic superhero which opened to mixed reviews. The status of this vigilante is about to rise with the upcoming 2015 release of “Marvel’s Daredevil” exclusively on Netflix. The anticipated series had a strong debut at the recent New York Comic Con, and among providing a sneak peak of the show it also divulged Charlie Cox (of Boardwalk Empire) as Murdock, while Vincent D’Onofrio will portray nemesis Kingpin. The Daredevil TV series will be Marvel’s fearless leap into the small streaming screen, and should prove to be a well executed maneuver.

Did you know: A previous, unrelated Daredevil comic book character was first published by Lev Gleason Publicationsin Silver Streak #6 (September, 1940). This creation from the Golden Age of comic books was made a star on the pages of Silver Streak fighting fearsome villains; eventually landing him his own publication Daredevil Battles Hitler #1 (July 1941): A comic which anticipated US involvement in World War II. 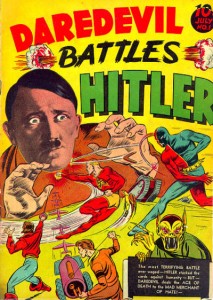 To find out about other notable and influential titles from the Golden and Silver Age of comics outside of the DC or Marvel Universe, contact us.