The evolution of comic book characters is part and parcel of positioning them for success with a new generation of readers. Back stories develop, identities change and personalities become more complex. Well known examples, are Nick Fury’s character reincarnation as an African-American, a new Hispanic Spider-Man, and the torch of Ant-Man being passed from scientist Hank Pym to master thief Scott Lang. In the case of the Flash, identities have changed numerous times, maintaining a thread between the essential character, but what do we make of the more interesting development of original characters when they evolve intellectually, psychologically, internally and spiritually.

This is the case with the big news surrounding Selina Kyle, a.k.a. the original Catwoman, when she recently outed herself and revealed her bisexuality. Since the inception of this Golden Age of comic books femme fatale, who debuted in Batman #1 during the Spring of 1940, Catwoman has been in part defined by her complex love-hate relationship with the Dark Knight. Initially known as “The Cat,” the acrobatically skilled, whip-brandishing burglar has gone from Batman love interest, villainess, to leading character. Now, current plot lines have Catwoman as the central figure in an eponymous comic book where she cast off the Catwoman role and undertakes one of antiheroine, and crime boss. 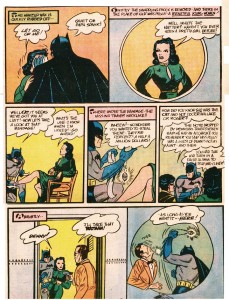 The latest issue of Catwoman (Number 39, by DC Comics), has Selina Kyle, the retired masked villainess and new head of Gotham’s Calabrese crime syndicate, confront Eiko Hasigaway, a mysterious character who has taken on the Catwoman persona without the blessing of Ms. Kyle. By the end of the encounter they share a plot changing kiss.

Series writer Geneviere Valentine wrote in her blog that outing Selina was in essence establishing the canon bisexuality of this iconic character. Valentine wrote: “She’s flirted around it – often quite literally – for years now; for me, this wasn’t a revelation so much as a confirmation.”

Contact us to take a closer look at the complexity of Catwoman’s story in 75 years of publication history. See if you can pin down her evolving persona in numerous classic appearances within Batman books as well as Detective Comics (Detective Comics#211, 1954, is particularly of importance) and other books of note.