Are you the type of Golden Age comic book fan that has a mind for the macabre? If so, you might want to rediscover Atlas’ Menace Series before the month is through. It is widely considered to be an important collectible for three reasons: For starters, it was pre-Marvel Comics and published during the reign of the Association of Comics Magazine Publishers. In addition, it introduced new menacing characters into the comicsphere, and last but not least they contained the work of many comic book masters from the Golden Age.

At the time, fans loved Atlas’ horror titles and Menace was no exception. The impeccable Bill Everett drew up the first six covers. The remaining ones featured the handiwork of Carl Burgos, Gene Colan, Russ Heath and Harry Anderson. Inside of the gloriously ghoulish comic books there was artwork by other legends. Among them were Seymour Moskowitz, John Romita, Al Eadeh, Jack Katz, Bob Powell, Joe Maneely and many more.

The first issue of Menace hit the newsstands and comic shops in the spring of 1953. It featured scripts by the iconic Stan Lee and original art by Bill Everett, George Tuska, Wener Roth and Russ Heath. Ten more editions followed, with the last issue showing up in May 1954. Stan Lee continued to write all of the stories for the series at least until Issue #8. It’s questionable whether or not he wrote the scripts for Issues #9 through #11. Nonetheless, all of the issues have great storylines with shock endings and cool characters. Some of the grisly beings you’ll meet are lizard men, zombies, werewolves, ghosts, vampires, witches and two-headed monsters.

You’ll find some of the issues on sale through our online store, including Issue #2. It contains four of Lee’s most loved horror stories, including On With The Dance! and Burton’s Blood! To learn more about the Menace Series, comic book original art, Silver and Golden Age comic books, please contact us today 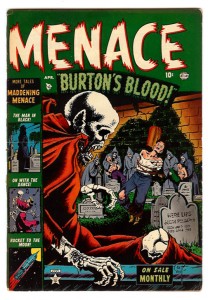