It was April 1964 when Daredevil leaped off the pages of comics and into our imaginations thanks to the creative minds of Stan Lee and Bill Everett with some creative input from Jack Kirby. Back then, none of the trio could have imagined comic characters rising to such heights of popularity in the movies and on television. 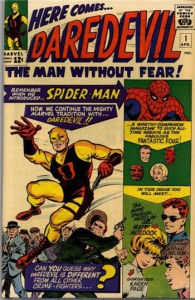 Daredevil is just the newest Silver Age comic book hero to transition off the pages of a Marvel or DC book and on a screen near you. Of course, unlike the shows Gotham or Agents of S.H.I.E.L.D., Daredevil is not scheduled in your TV Guide. Instead, the show is being produced and shown by Internet-based Netflix as the first of several Marvel-based shows coming to the streaming service.

Daredevil’s origins, which appear in Daredevil #1, start with humble beginnings. Born and raised in New York City’s Hell’s Kitchen neighborhood and the son of a boxer, Matt Murdock is left blind after an accident with a truck carrying radioactive substances. The spilled chemicals take away Murdock’s sight forever, but in return gift him with enhanced senses such as hearing and touch, as well as an “echolocation” ability that allows him to “see” like a bat or a dolphin might by using sound to identify objects. (Did you know that same accident is also the origin of the Teenage Mutant Ninja Turtles?)

Daredevil’s beginnings instantly put him head-to-head with some of the most recognizable villains in the Marvel universe, such as Kingpin (who first appeared in Amazing Spider-Man #50 in 1967) and Bullseye (Daredevil #131 in 1976). Other villains Daredevil tangled with in the early days included the Owl (Daredevil #3 in 1964), Stilt-Man (Daredevil #8 in 1965) and The Enforcers (Amazing Spider-Man #10 in 1964) among many others. 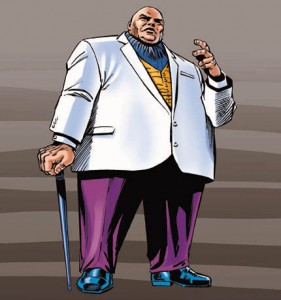 Daredevil even rubbed elbows with some famous heroes, including one who became his fast friend in Spider-Man when the two met for the first time on the pages of Daredevil #16 in May 1966.

Although Daredevil will appear in his red costume for the Netflix series, which is slated for an April 10 release, his original costume was yellow and black with just hints of red. It wasn’t until Daredevil #7 that the red costume made its first appearance, designed by Wally Wood. The Man Without Fear’s other costume history is at this website.

The Netflix series will feature Matt Murdock as Daredevil, with a supporting cast of characters like girlfriend Karen Page (debuted in Daredevil #1), Foggy Nelson (Daredevil #1), Claire Temple (Luke Cage: Hero for Hire #2 in 1972) and Ben Urich (Daredevil #153 in 1978). One of the villains will be The Stick (Daredevil #176) as well as the above mentioned villains Kingpin and the Owl.

We can also help you find any issues you may need to complete your collection. Just contact us and let’s see what we can do for you.