What a ride it’s been for Marvel Comics! This American literary institution, pop cultural phenomenon and creative heavyweight, hasn’t always had a super smooth trip to the top of the comic book industry. Yet with a history that is as mythical as their creations, it’s our pleasure to toast this publishing powerhouse on their 75th year anniversary.

The company was founded under the name Timely Comics in 1939 by Martin Goodman, a pulp magazine publisher who had decided to expand into the emerging comic books medium. The first release was Marvel Comics #1 which featured such notable characters as Human Torch and Namor the Sub-Mariner. The first release was a huge success, and combined with the second issue, together they would nearly sell 900,000 copies. Within the first year in business the company expanded and brought in new editorial and artistic talent including the likes of future industry legend Jack Kirby. Kirby in collaboration with writer-artist Joe Simon, designed Captain America, which was launched in Captain American Comics #1 (March 1941).

Goodman’s vision for the company would be to release comics under different shell publishing identities. During this evolution using titles such as Atlas Comics, the company put out comics in a myriad of genres, western, war, horror, children’s, crime and more. By this time Stanley Lieber, who was writing under the pseudonym “Stan Lee,” had become a part of the team. The name Marvel Comics would not be adopted as the main corporate entity until 1961.

By the late 1960s the company was selling 50 million comic books a year. It had created such enduring characters as Spider-Man, The Fantastic Four, The Incredible Hulk, and many more. In 1968 Goodman sold the company to Perfect Film and Chemical Corporation, while remaining as the publisher. he eventually would retire in 1972. The seventies presented a time of distribution problems, and the adoption of the Comics Code of Authority seal, an industry censor to address national concerns over the cultural influence of comics content.

By the eighties Marvel was coasting along, despite maintaining a market tug of war with rival DC Comics, the company was not on sure footing and would be sold to New World Entertainment; which three years later sold the holdings to MacAndrews and Forbes. In the nineties success was found with title revamps and diversification with trading cards and other ventures. Internal funding issues and an industry slump lead to the company filing for Chapter 11 bankruptcy protection in 1996. By 1997 the company was dissolved and with the financial backing of the Toy Biz company, a new corporation was formed, Marvel Enterprises.

The 2000s lead to diversification with the development of new imprints such as MAX (an explicit line of publications), Marvel Adventures (children’s comics) and Ultimate Marvel, an alternate Marvel Universe for character development. This period also marks the output of successful film franchises such as Blade, X-men, Spider-Man movies and others. Before the decade had close, The Walt Disney Company purchased Marvel Entertainment for $4.2 billion dollars. Currently Marvel continues to publish it’s imprints and jointly works with Disney Publishing Worldwide to offer shared properties such as Disney/Pixar Presents, and upcoming in 2015,Star Wars comics.

A new book 75 Years Of Marvel by Roy Thomas and Josh Baker (Tashen America, 2014) beautifully illustrates the art and creative accomplishments of this fascinating history with photographs and original art displaying the significant contributions to the Silver Age and Golden Age of comic books.

To find the relics of this hallowed history contact us and you’ll have the opportunity to get your hands on the original stories that have helped shaped a part of American pop culture. 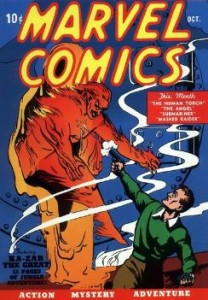