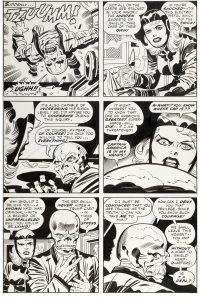 Collecting Original Comic Art is a fun addition to comic book collecting but it can be daunting for collectors just getting into the market.   There is really something amazing about being able to hold a page in your hand that was worked on by one of your favorite artists.   You also get the thrill of seeing the art at “real” size which is anywhere from 1 ½ times larger than print size to 2 or even 3x!

You also see the art in its purest form.   Take a look at the Jack Kirby page shown at the top of this post, with inks by his longtime collaborator Mike Royer.  There is action and movement between each of the panels and together they tell a very dynamic story.   There’s a real impact to seeing the raw black lines and sometimes even occasional white out or blue pencil lines used to “build up” the page as the artist works.   The page itself is striking and a great example of Kirby’s later years at Marvel when his style had evolved into it’s final stage.

While a page like the Kirby example would be in the $5-$10K range you can still find bargains which still feature hand drawn comic art.

This example from Tangent: Secret Six #1 by Tom Grummet is currently available on our site at only $110 and it’s a great page featuring a variety of angles, some great closeups and a driving rainstorm that adds a great deal of atmosphere to the page.   It also features the lettering done on the page which is something modern comic art no longer has— and much of todays comic art is all done digitally so originals are harder to come by. 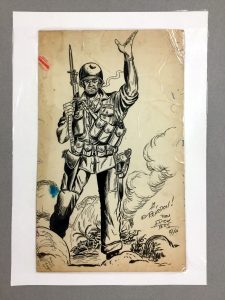 Another option is to collect sketches done by your favorite comic artists.   Many current artists do these at conventions and personal appearances and you still get the pleasure of seeing great ink line work and an original piece of art done by hand.   This example, by the legendary Dick Ayers, was also in our Original Art section for a bargain price. 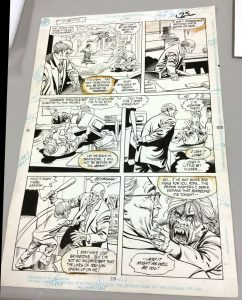 If you have a favorite artist you can seek out pages that feature their work but lack major characters— this page from SUPERBOY #19 (1990) features only a single image of Superboy on it and it’s small figure at the top of panel 1, the rest of the page shows us a little boy transforming into a horrible monster!   A great page that we are selling for under $200!

Original Comic Art can be daunting to the new collector because unlike comics there is no possible way to do a price guide— because each and every page of art is one of a kind and therefore valued at only what the owner is willing to sell at and the buyer is willing to pay.

When asked for advice on how much to pay for a given page the best answer is to say simply:  Buy what you like and what you can afford and look for your next piece.  Be warned, collecting Original Comic Art can be addictive but well worth the effort!

Check out our Original Art Section for some real Bargains!   Remember to join us Tuesdays at 6pm for Superworld Live with Ted and Thursdays at 1pm for Lunch With Jose where we offer some great deals and most of all, fun!