CHALLENGE OF THE SUPERHEROES 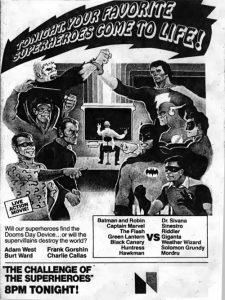 It’s hard to describe to someone growing up today in this world of one big budget superhero movie after another on the silver screen that in the mid to late 1970s there was a superhero live action drought and we took what we could get and we were greatful.   Spider-Man was appearing in a semi-regular basis on his CBS-TV Show starring Nicholas Hammond, Wonder Woman had her own show from 1975-1978 starring Lynda Carter which started out set during World War II and later was brought into the present day when the show switched networks from ABC to CBS.   Probably the most successful TV Superhero at the time was The Incredible Hulk who had a hit CBS-TV series starring Bill Bixby and Lou Ferrigno.

But if you were a DC Fan, with the exception of Wonder Woman on Saturday nights, and SHAZAM on as a Saturday Morning Kiddie TV Show which found Billy Batson driving around in a Winnebego you had some pretty slim options for seeing the “big guns” in live action.  Okay, SUPERMAN THE MOVIE had opened on Dec 15th 1978 to blockbuster numbers on the big screen but back in the days before DVD or even VHS if you wanted a regular dose of live action superheroes you needed them on TV. 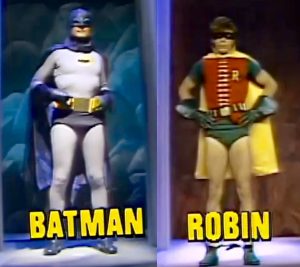 So you can imagine the excitement generated by the above illustrated ad in the pages of TV Guide– right there- BATMAN AND ROBIN would be back in the form of Adam West and Burt Ward– who’s own live action TV Series had been cancelled ten years earlier but still played regularly in reruns.  But in the add we saw that we were also getting Green Lantern, The Flash, Captain Marvel (I don’t know if any of us wondered if it would be the same guy from the TV Show) and a bevy of bad guys including The Riddler, Sinestro, Weather Wizard and Solomon Grundy!   This was a superhero kid’s dream come true.   As a note, I do know we all wondered why The Joker or The Penguin weren’t involved, but such was the life of a kid in the 70s. 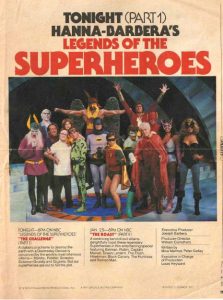 If that first ad wasn’t exciting enough, and most of us recognized it was a drawing, the ad that ran in the paper the same day was even better!    It featured a full color photograph of all the heroes including Hawkman, Black Canary and Huntress and a surprise Dr Sivana!

The special aired on NBC-TV as a two part series,  the first part was to be called LEGENDS OF THE SUPERHEROES (even though that original TV Guide called it CHALLENGE OF THE SUPERHEROES) and then the following week would be part II– called “The Roast”!  Boy if we only knew what that meant we would probably not have tuned in.

The specials were a sort of soft pilot put together by Hanna-Barbera who were normally an animation studio, and were the current producers of THE SUPERFRIENDS, a Justice League Cartoon of sorts – they opted to go live action and recruited former Batman TV Stars West, Ward and Frank Gorshin to reprise their roles from the old 60s show as a way of bringing in viewers.  Unknown actors were cast as the remaining members of the Justice League while some big name D-Grade Vegas comics like Charlie Callas and Jeff Altman were cast as villains.   Howard Morris who had played Ernest T. Bash in the ANDY GRIFFITH SHOW and lended his voice acting talents to a plethora of Hanna Barbera cartoons was to play Dr Sivana.

William Schallert, who had a long and successful TV Career was brought in to play “Retired Man” because that was the level of show we were going to be getting. 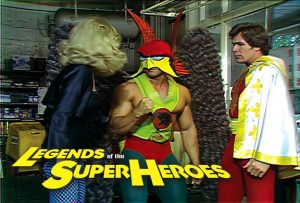 Adam West brought along one of his cowls from the original 60s show, but it had degraded so badly a seamstress was brought in to re-cover it in new fabric.  The trouble was she never thought to take any Polaroids of it before she took it apart so when she put it back together she made the neck too short so it could no longer tuck under the cape and the face markings were completely wrong.  This cowl would affectionally be come to be known as the Gilla Cowl because of it’s resemblance to a Gila Monster’s fins.

While it was fun to see Batman and Robin back in action again, complete with one of the original Batmobiles, even as a ten year old kid you recognized that this was really bad, the jokes were flat and the entire episode was played for morons.   At one point Batman and Robin have to use a Volkswagon Beetle because the Batmobile has broken down, and at another they don’t recognize Solomon Grundy as a gas station attendant because of a magic hat he’s wearing.  And while the costumes for the other heroes were somewhat cheap looking, it was great to see Hawkman, Green Lantern and Black Canary live for the first time. 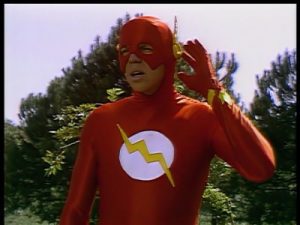 This was also the first live action appearance of The Flash– all of the heroes had small adventures of their own, but the less said the better because none of them are standouts.  They mostly stumbled their way through a scene and then did some sort of stunt as Black Canary did on her motorcycle.

As kids we were disappointed in how bad the show was, but it was January and it was still superheroes and we all held hope Part II would somehow be better.  It wasn’t.

The Follow up the next week, THE ROAST, took the moronic humor to the next level, adding characters like Ghetto Man into the mix and having THE TONIGHT SHOW’S Ed McMahon act as MC for a ROAST of the superheroes, like the Dean Martin Roasts our parents thought were hilarious but weren’t– and this was even worse.

Needless to say the airings didn’t lead to a regular series and in his biography Adam West expressed regret for taking on the part.   The very next year Warner Bros announced a Big Budget Batman film and this pair of episodes certainly did nothing to instill the idea of Adam West coming back into the Batman role as something that was a good idea.

Warner Home Video has released both episodes on one DVD-R but I’m warning you, you’ll regret it.

SUPERWORLD BLOG! Check back every Thursday for a new post!

Superworld Comics has been in business for thirty years, buying and selling vintage comic books!  If you’ve got a collection you are ready to part with give us a call at the number listed at the top of the website, and be sure to tune in to Instagram for Superworld Live Shows;  Teddy’s Treasure Chest Tuesdays is on at 6pm and Jose’s Show airs on Thursdays (Check @superworldcomics Instagram account for show times).  Each show features great comic books at bargain prices and check out our website for thousands more books available!