Before Stan Lee, Steve Ditko, and Jack Kirby were working together to bring the Marvel Universe to life, the Silver Age of Comics had already begun thanks to the Distinguished Competition.  In the pages of Showcase #4, published in October of 1956, a Golden Age hero was reborn with a new identity and new look.  This Golden Age hero was the Flash, but no longer Jay Garrick he was Barry Allen a shy forensic scientist doused in chemicals and struck by a bolt of lightning that gave him super-speed.  The bolt of lightning that struck him not only changed Barry forever, but it changed pop culture forever too. 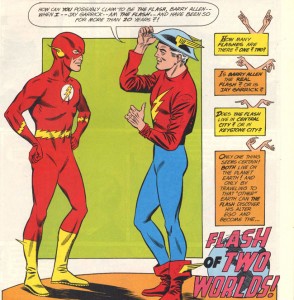 While Robert Kanigher was the first writer to tackle the new Flash, it was the team of John Broome and artist Carmine Infanito that crafted the Silver Age Flash.  In doing so they brought superheroes back to the forefront of the American consciousness, allowing for superhero comics to thrive once again.  Infanito crafted a world that was bright and colorful, truly embracing the grand nature of superhero storytelling.  The Flash was visually vibrant and his stories were just as exciting.  Barry Allen was the every-man hero for a new generation facing down a rouges gallery that has become the stuff of legend in comic book lore.  From Mirror Master to the Reverse Flash, Barry’s enemies were just as vibrant, colorful, and exciting as he was, thus engaging readers on a whole new level.  Then, in Flash #123 they introduced the concept of parallel realities and the multiverse, creating a concept that has become an essential piece to today’s comic book storytelling. The new silver age Flash provided a model for the new age of superheros and gave the world an unforgettable hero, just like the recent Flash TV series has done.

The CW’s version of Barry Allen is truly the Silver Age hero brought to life. The show has the same colorful visuals that Infanito originally drew, and it fully embraces the bombastic and grand nature that made the silver aged hero so loved.  Then of course there is the fact that the show has introduced the concept of the multiverse, just like in Flash #123.  The sense of wonder and excitement that laid the groundwork for the silver age has translated to the small screen, setting up an unprecedented way to tell superhero stories again. Comic book television has entered into its own Silver Age, embracing their heroes as never before. Just like he did in the pages of Showcase, Barry Allen has brought back new life to a superhero world that needed more color, more excitement, more wonder, and more Flash. 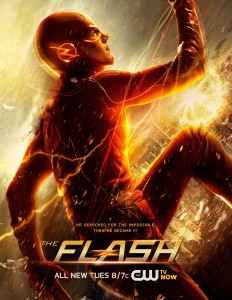