CONFESSIONS OF A BRONZE AGE COMIC-READER 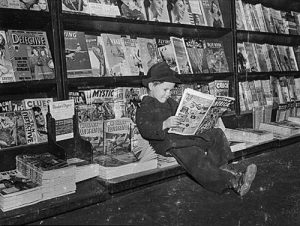 Cue the Way-Back Machine, no it’s not one of Teddy’s Journey’s back to the Depression era of buying comics and going to a first run Jimmy Cagney movie at the Picture Show.   I’m not as crusty as Teddy Bear but I do go back to a Bronze Age vintage. 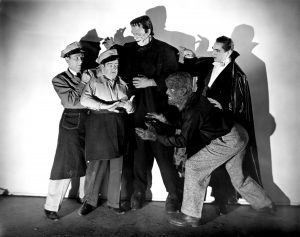 The Academy of Motion Picture Arts and Sciences will host a month-long series of screenings of classic horror films with “Universal’s Legacy of Horror” in October. The series is part of the studio’s year-long 100th anniversary celebration engaging Universal’s fans and all movie lovers in the art of moviemaking.
Pictured: Bud Abbott, Lou Costello, Glenn Strange, Lon Chaney, Jr., and Bela Lugosi in ABBOTT AND COSTELLO MEET FRANKENSTEIN, 1948.

Being a kid in the 1970s was a different time, picture it if you will, there are no video games other than PONG, there is no streaming or DVD or even VHS so if you want to watch your favorite movie you either have to buy a ticket to it or make plans around when it’s coming up on TV.    One of the big excitements I had as a kid were trips to Boston’s Logan Airport to pick up relatives and I was always pumped to jump in the backseat and watch landmarks like the TV38 Tower pass by as we got closer and closer to the “Big City”– sometimes we’d even stop in Chinatown for a quick dinner.   I really enjoyed these trips because I’d have the whole backseat to myself and I’d bring along a small stack of abused comic books to read or re-read. Only this one time we headed out and the trip was competing with Abbott and Costello Meet Frankenstein which was going to be showing on TV-27 at 6pm and I knew we wouldn’t be back in time, causing me to whine the whole trip.   I can’t envision what it’s like to be a kid with the option to watch ANYTHING you want ANYTIME you want.

But back to comics;  my reading of them started before I could read on my own, but I could look at the pictures and create a story in my head.  One of my friends had an older brother and he knew I liked the BATMAN TV series which ran afternoons at 4:30 and he came into my friends room and tossed a stack of Batman Comics onto the bed and told me to keep them.  I was enthralled! Here was Batman ANYTIME I wanted to visit with him, and he looked almost exactly like Batman on TV!   I remember vividly the first issue, it was DETECTIVE COMICS #388 “Public Luna-Tic Number One” which featured The Joker pulling some nonsense on The Moon! The backup story was even more impressionable because it featured an amazing Gil Kane splash of Batman holding a gun on Batgirl! Why would he do this? Why does Superman, who was also in the story, look like a gangster? What is happening? Why can’t I read?!

It was comics that got me into reading because I had to know what was happening, and by the time I hit Kindergarten at four years old I could read better than anyone else in the class. My mom encouraged my reading of comic books, one because it kept me from whining about whatever it was I was going to whine about (vegetables, clothes shopping, my older sister) and two it got me to read. My mom was always a big reader and one of the most exciting days in school was when the Scholastic Book Order Form would come out and I’d get to pick out pretty much whatever I wanted. Books were not restricted. 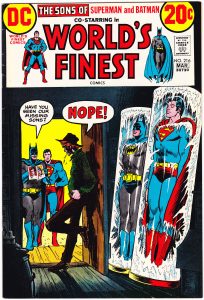 On Fridays after school my mom would pick me up and we’d cross Pleasant Street (Two lanes– I was not allowed to cross two-lane roads on my own) and pick up 2-3 comic books with my allowance. I never spent my money on candy or soda, it was always comic books and as much as I could it would be Batman Comic Books. This particular newsstand never seemed to get BATMAN, but they would have DETECTIVE COMICS, WORLD’S FINEST and JUSTICE LEAGUE OF AMERICA which all featured Batman.

When I got a little bit older comics got a little more expensive. They’d started at 15c, then 20c, then 25c and then the ungodly sum of 50c but they also got bigger so you got more comics for your allowance money. As a “man” of eight or nine I was allowed to travel to friends houses after school and it was then that I discovered West Side Pharmacy which was much further down Pleasant Street but they had a HUGE selection of comic titles. They had Marvel Comics too, which the other newsstand absolutely never had, but Marvel Comics looked and felt cheap to me and I had very little connection to the characters. I knew Captain American from the bad cartoon series which aired in the afternoons but they just didn’t interest me. 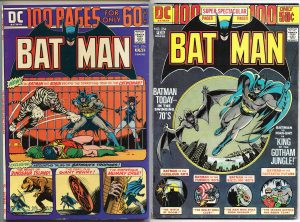 At West Side, I found both BATMAN #254 and #256 both of which were 100 page giants for 50c and 60c — that wiped out my allowance and the pharmacist spotted me the extra 10c to cover both books. I read these through and through and loved the Golden Age Batman reprints inside both– incredible stories I’d never heard of by artists like Jerry Robinson and Dick Sprang.

Shortly after that came BATMAN LIMITED EDITION C-25 which was a TABLOID sized comic that featured some of the greatest Batman stories I’ve ever read all for the pricely sum of $1. This was followed by many other Tabloid sized books, which have come to be known as Treasury Editions by Collectors, and one of the greatest of all time was SUPERMAN VS THE AMAZING SPIDER-MAN! That was like reading a blockbuster movie version of superheroes at a time when superheroes weren’t in the movies. 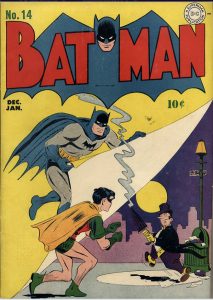 This led me to seek out comic book stores, and the first one I discovered was on Park Avenue, it was a tiny little shop but they had a lot of books to choose from. Eventually I would discover That’s Entertainment and make friends with the owner, Paul Howley, a friendship that lasts into the present. It was at Paul’s little shop on Chandler Street that I saw my first ever Golden Age Comic Book– it featured Batman and Robin peeling back the cover of the book to reveal The Penguin. I asked Paul if it was a coloring book and he smiled and took it down to show me that it was actually BATMAN #14 from 1942!  Wow!  I had to have this book!  It was in VG- condition and $50. My first big purchase of a comic book.

Later on he got a Detective Comics #34 which he had marked at $90 and when I tried to buy it his employee, Steve, a really great guy, said “A kid like you doesn’t need to be spending $90 on a comic book!” — I bought it anyway and my quest to get Detective #29-#37 was on. Even then I knew #27 was out of my league and they’d reprinted it as one of those Tabloids so I’d already read it, #28 had an awful cover so I wasn’t interested in that and #38 on didn’t interest me because I hated Robin thanks to Burt Ward (although eventually I would collect those too).

They say the Golden Age of Comic Books is whenever you’re eight years old– and in my case I think that’s spot on.

Superworld Comics has been in business for thirty years, buying and selling vintage comic books!  If you’ve got a collection you are ready to part with give us a call at the number listed at the top of the website, and be sure to tune in to Instagram for Superworld Live Shows; Teddy’s Treasure Chest Tuesdays is on at 6pm and Lunch With Jose in on Thursdays at 1pm.  Each show features great comic books at bargain prices and check out our website for thousands more books available!