Black Widow first appears in Tales of Suspense #52 in 1964– her modern day appearances consists of Daredevil in the late 70s, Journey Into Mystery #517-519 in 1998, a self-titled series in 2010, A regular character in the Secret Avengers from 2013, as well as a relaunch in 2016 for Marvel’s post-Secret Wars. In addition to modern day comic appearances, the Black Widow has appeared in 8 of the 23 Marvel Cinematic Universe films. 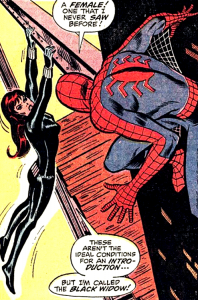 Black Widow appears in a panel with Spider-Man

The Black Widow’s initial appearances in comics were that of a recurring, Russian-Spy who was a villain to Iron Man. After recruiting the superhero Hawkeye to her cause, the Russian government begins to supply her with the first Black Widow costume, as well as a high-tech weaponry. She eventually defects to the US after appearing brainwashed by the Russian’s against the United States (In The Avengers #29). Black Widow later becomes The Avengers sixteenth member.

In 1970, the Black Widow is reintroduced with a new look. Shoulder-length red hair, skin tight black costume, and wristbands that fire spider threads– This went on to become the characters most recognized appearance. This change transpired in The Amazing Spider-Man #86. 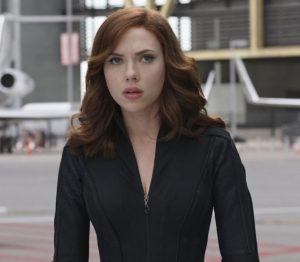 Scarlett Johansson as “The Black Widow”

Black Widow will make her 9th appearance in the 24th Marvel Cinematic Universe in her solo film Black Widow which will appear in theaters on May 1st 2020. If you’re interested in picking up a copy of Tales Of Suspense #52 we have one here.